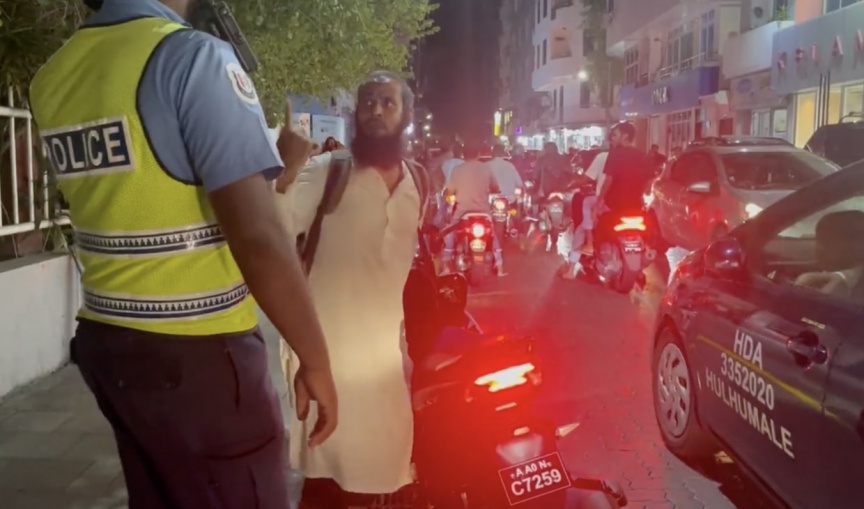 The man arrested on Monday for attacking a state minister on Monday with a sharp-edged weapon had threatened to kill two police officers, a day before the attack.

State Minister for Environment, Climate and Technology Ali Solih was stabbed on a street in suburban Hulhumale’ on Monday afternoon. Police confirm they arrested a 43-year-old man in connection to the case.

He had reportedly attempted to stab Solih, the chief spokesperson of Jumhoory party (JP), on the back of his neck, and instead slashed his left hand when he lifted his hand to protect himself.

Solih was taken to the hospital.

Sun has been informed the suspect is the same man who barged into the Salman Mosque back in July wearing clothing with the logo of terror organization Islamic State, and disrupted Friday prayers. He was arrested by police and released the same day.

He was also seen by multiple witnesses, including reporters, threatening two traffic police officers in Majeedhee Magu on Saturday night.

The incident had taken place outside the residence of Central Henveiru MP Ali Azim, who was meeting Parliament Speaker, former President Mohamed Nasheed. He had argued with and threatened to kill the traffic police in the area.

He had stopped and parked his motorcycle on the side of the road, but was told by police that he could not keep his vehicle there.

“You cannot move me. Touch me if you want to die,” he said, before getting back on his motorcycle and attempting to drive away.

Two traffic police officers got in front of his motorcycle and attempted to stop him.

He got off his motorcycle and brushed off a police officer who attempted to stop him.

He was driving the same motorcycle, a black Air Blade, on Monday.