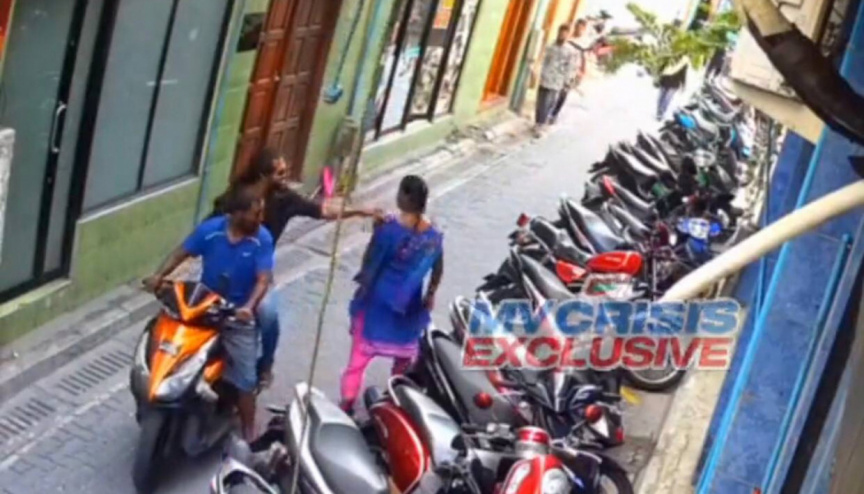 Snapshot from CCTV footage showing gold chain worn by a female pedestrian on her neck being snatched by two men on a motorbike.

Police have arrested the man who snatched a gold chain worn by a female pedestrian on her neck.

The suspect arrested has been identified as Mohamed Shamleen, 32, Orchidmaage, GDh. Thinadhoo. Criminal Court remanded him in police custody for 30 days on Thursday.

Criminal Court’s order to detain Shamleen, who has an extensive criminal record, stated that there was sufficient evidence against him. In this regard, it was noted that the police had submitted CCTV footage showing Shamleen snatching the gold chain as evidence.

Police, on Wednesday, also arrested the driver of the motorbike seen in the CCTV footage as an accomplice; Mohamed Althaf, 30, M. Kakolhas.

At Althaf’s remand hearing held on Wednesday, he stressed that his mother was a sick person. He also said there is a chance he may lose his job if his remand is extended.

Althaf said in his remand hearing that he had cooperated with the police. On this note, he underscored that the stolen gold chain had been recovered, whereas he was the one that disclosed to the police the place where the gold chain was sold after it was stolen. The police had recovered the gold chain after it had been sold to a jewelry shop.

The CCTV footage showing the robbery had gone viral on social media. In this regard, the female pedestrian, who is a migrant, is seen walking on Dhilbahaaru Magu when the two men go up to her on a motorbike. Shamleen, who was the passenger, is then seen snatching the gold chain from the woman’s neck and Althaf drives away, soon after. The video clearly shows the faces of both men. It also shows the license plate of the motorbike. The victim is shown to be in clear shock after her chain was snatched.

After the footage went viral– the identities of the suspects were also disclosed on social media.