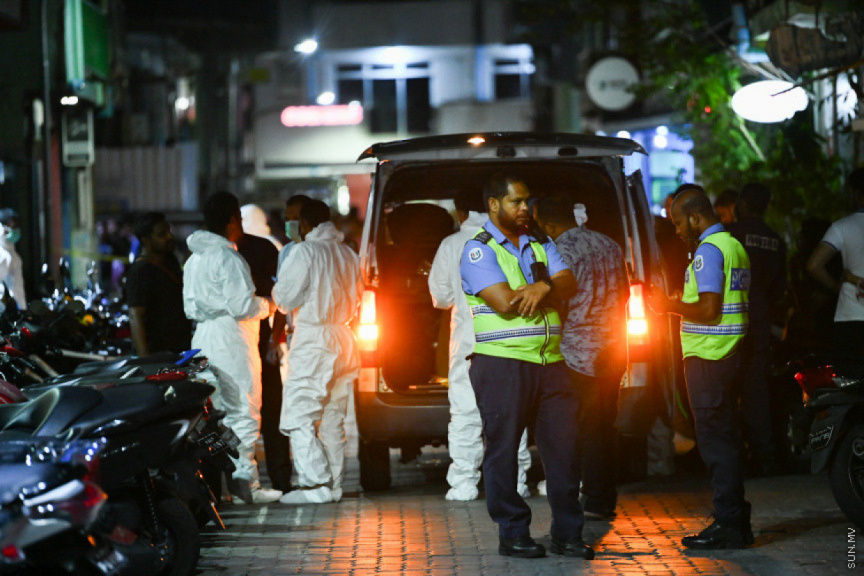 Police outside an apartment in Male' City, where Shiaau Mohamed Saeed, 22, was found murdered on August 6, 2022. (Sun Photo/Mohamed Hayyan)

Maldives Police Service on Tuesday denied leaking pictures of the crime scene where Shiaau Mohamed Saeed, Kuri, and Fuvahmulah City, was brutally murdered, which were not leaked by the authority.

Although some media reported that those pictures were leaked via Police, the authority noted that they do not believe this to be true.

Police stressed that those pictures were not taken for their investigation or being used by them. Moreover, it was revealed that an investigation was ongoing to see if anyone had entered the scene and captured the images.

Noting that the images depict extreme violence and brutality and could impact those who see them, Police advised not to circulate them to each other through various platforms.

Shiaau’s funeral was held earlier this week after the autopsy was conducted abroad. Her body was transported to Fuvahmula for the proceedings.

The brutal murder took place on the ninth floor of H. Sheereen Villa in Male’ City on August 6.

Police said that the crime was reported to authorities at approximately 11:18 pm on Saturday.

A suspect was arrested at a scene - renowned local skater, Ali Shaahil, 22, Finfenmaage, F. Nilandhoa. He was escorted in a hazmat suit to a police vehicle at 1:25 am on Sunday.

The suspect arrested; Shaahil has been remanded in police custody pending the outcome of his trial.

Shiaau’s murder is considered one the most gruesome in the recent history of the island nation. This is as dismembering the body following a murder is extremely uncommon in the Maldives.