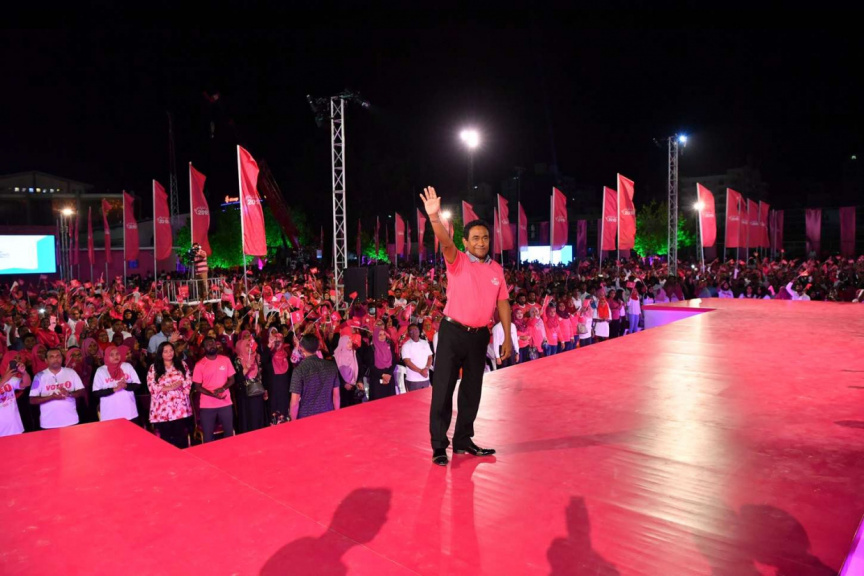 Opposition coalition has decided to hold a special ceremony to officially handover Progressive Party of Maldives’ (PPM) ticket to the party’s candidate in the upcoming presidential election.

Abdul Raheem Abdulla (Adhurey), the leader of PPM’s coalition partner People’s National Congress (PNC), announced in a tweet Sunday evening that Yameen had agreed to run in the elections in accordance with the senate’s decision.

A special ceremony to officially handover the presidential ticket to Yameen has therewith been scheduled for August 19th.

An official from PPM told Sun on Wednesday that that ceremony is a mass event being held in honor of Yameen. In this regard, the official said that the agenda of the ceremony includes handover of presidential ticket to Yameen and congratulating him.

“The ceremony has other things on agenda as well. But the main segment of the ceremony is to handover the presidential ticket to our leader,” the official had said.

Yameen being named as PPM’s candidate for next year’s presidential election without holding a primary has been heavily criticized by the public.

Commenting on the matter, Adhurey said that the presidential ticket was given to Yameen in accordance with PPM’s constitution. Stressing that other political parties have no room to criticize the decision – he added other parties making critical remarks as they are scared to compete with Yameen.

Noting no attention will be paid to banters of other parties – Adhurey said that Yameen will win next year’s election.

Yameen is currently on trial on money laundering and bribery charges in connection to the sale of V. Aarah and R. Fuggiri during his administration.

He will not qualify for the elections if he is convicted.

Sentencing in Aarah trial is scheduled for September.