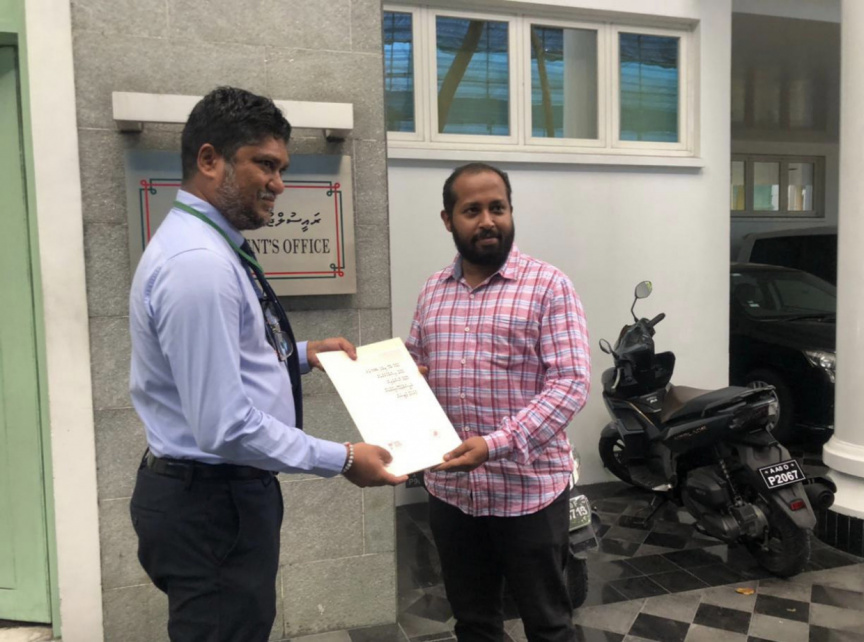 A petition has been submitted to President Ibrahim Mohamed Solih on Thursday, requesting the amendment of the provision which allows courts to compel journalists to disclose their sources in some circumstances in the Evidence Bill, recently passed by the Parliament, before giving it ratification.

The petition signed by 158 journalists was submitted to the President’s Office by Maldives Journalist Association (MJA).

Speaking to the press after the submission of the petition – MJA’s President Ali Rishfan said that the petition included signatures of journalists from online medias and broadcasting medias.

“We are handing over a petition with the signature of 158 journalists. Many journalists from both online medias and broadcasting medias had signed it,” he had said.

Rishwan said that he hopes President Solih review the petition – and send back the Evidence Bill to the Parliament without ratification for the amendments urged.

Commenting on the matter, MJA’s Secretary-General Ahmed Naaif stressed that efforts calling to amend the provision allowing compelling journalists to reveal their sources in Evidence Bill will not stopped.

“There is no intention on stopping. If there is no change to bill even after the submission of the petition – we will talk about it,” he had said.

Naaif said that additional activities under this trajectory has been planned for the future in collaboration with journalists. Underscoring the cooperation received in the matter by journalists, he had expressed his gratitude.

Parliament passed the Evidence Bill without amending the provision which allows courts to compel journalists to disclose their sources in some circumstances despite journalists protesting in front of the parliament building.

In a meeting with the journalists following the protest – Parliament Speaker Mohamed Nasheed said that only remaining available option was to pass the bill as it is – and later makes the amendments urged.