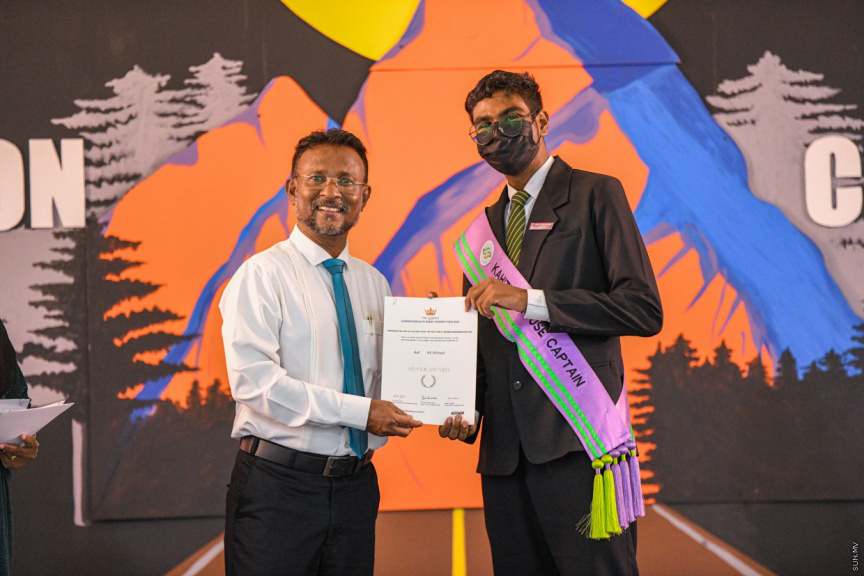 Huravee School on Wednesday held a ‘Succession Celebration’ to commemorate the winners of various activities held by the school this year and as well as the previous year.

During the celebration held at Huravee School, the winners of different extracurricular activities such as spelling bee, Dhivehi Adhaby Foavahi, Madhaha recitation competition, and Science Fair were awarded certificates.

While speaking at the ceremony, the Chief Guest of the event, President of Dhivehi Language Academy Dr Ashraf Abdul Raheem said that students should keep the school motto of building a productive and bright future for the nation in mind even after progressing from the school to society.

He went on to question the students on what could be done to benefit the nation.

Furthermore, Dr Ashraf advised the students to prioritize Islam, Dhivehi language, culture and traditions for a brighter future rather than individual thinking.

“There are many countries where buildings have crumbled to the ground, where there are no schools, health sector, and widowed women. Where men have lost their wives. No medicine, children without the love and care of their mothers. How many such countries are there? A country just by name.”

He went on to urge everyone to work together to strengthen the nationalism if they do not want to see Maldives crumple in a similar manner.

Meanwhile, the school Principal Abdulla Rasheed who also addressed the gathering said that the purpose of conducting such activities in a school was to promote skills in students that can be used beyond their school life. He also said that the progress of the entire society should be prioritized rather than individual progress when stepping into society.

“We must get help, provide help and care to each other, and aid in fulfilling each other’s needs in the community.”

Additionally, he said that thinking about another success in an obstacle to your own was not the best way. Instead, he advised that victory achieved together would be much sweeter.

O’ Level exam for the year commence with 5,939 students