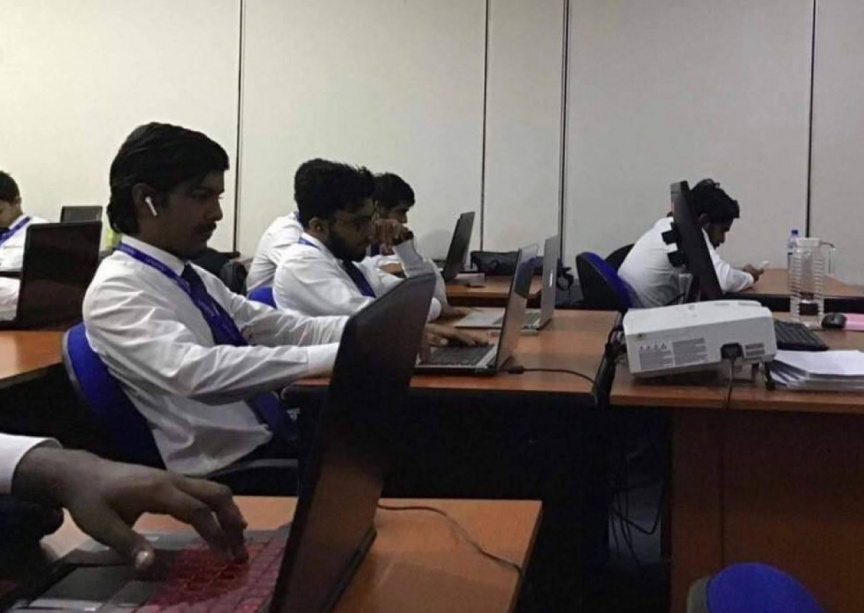 Maldivian students at the SriLankan Aviation College. (Photo/Courtesy of students)

Maldivian aircraft engineering students at the SriLankan Aviation College have expressed concern over lack of action from Maldivian authorities despite repeatedly reaching out to various institutions over their prolonged course duration.

The most senior batch of Maldivian aircraft engineering students had joined the college in 2018. The students are now in year four of a course which was supposed to take just two years and six months.

They have exhausted the funds from their student loans, and are now spending money out of their own pocket.

The students estimate they have now had to spend over MVR 100,000.

The students have repeatedly raised their concerns with the President’s Office, the Higher Education Ministry, the Foreign Ministry, and the Maldives Civil Aviation Authority.

One of the students, Faris Mohamed told Sun they had sent numerous letters to the President’s Office, the last sent recently.

“We have repeatedly sent letters. We have talked. I’m from the most senior batch. I have been struggling like this for over four years now. But it was a two-year and six-month course. I have two months left to complete. We have so many concerns. But we have not received a sufficient response for any of it,” he said.

Faris said that because Maldives Civil Aviation Authority only accepted certificates from specific colleges in specific countries, their only option had been to study from the SriLankan Aviation College.

In one letter to the President’s Office, the students said they had received their student loans because they joined courses in a college accepted by the Maldives Civil Aviation Authority, and their only option was to chose the SriLankan Aviation College.

“A two-and-a-half-year course has prolonged due to the various issues facing Lanka. The current political and economic problems and the strikes have impacted our college, casting the future of our courses in doubt, and pushing us into a world of uncertainty and financial trouble,” wrote the students in the letter.

The students said they had repeatedly reached out to various state institutions seeking a solution to the issue, but had been left to fend for themselves, however dire their circumstances.

“Our biggest concern is the interruption to our education. It doesn’t seem like anyone else is concerned. I am from the second most senior batch. With the students from the senior batch unable to complete their practical hours, how can we? We haven’t received any help from the authorities despite this being going on for so long,” he said.

The students said they had repeatedly met with officials from the Higher Education Ministry, but had never received an answer as to what would be done to solve the issue.

The students said they found it unacceptable.

Lanka asked to waive off visa fees for students