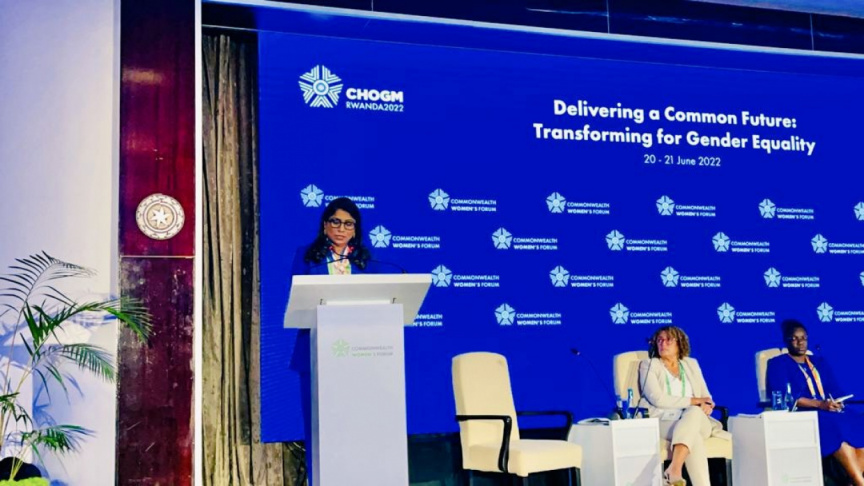 Maldivian Defense Minister Mariya Ahmed Didi has called on the need to work together on peace and security by building trust and friendships through defense partnerships forged with a shared vision for a rules-based international order which does not sideline women.

She made the appeal in her keynote address at the Commonwealth Women’s Forum’s Session on Women’s Engagement in Peace and Security held in Kigali, Rwanda, on Wednesday.

In her remarks, Mariya noted that threats and security challenges were highly complex, volatile and hybrid in the modern world, meaning no country could defend itself alone.

She said that if the global community was to address those challenges, it could not relegate women to the margins of society.

“We cannot talk about peace and security without us women in the equation. Where there is no peace, it is our homes, our children, our schools, our communities and our livelihoods that are disproportionately affected,” she said.

Highlighting Maldivian President Ibrahim Mohamed Solih’s decision to appoint a record number of females to public office including his Cabinet, Mariya spoke of the President’s confidence in breaking the glass ceiling, and appointing a woman to lead the defense sector to tackle the country’s complex security concerns.

Mariya had made history by becoming Maldives’ first female Defense Minister with her appointment to the Cabinet in 2018.

Mariya said women held the reins, it paved the way for the injection and percolation of perspectives and approaches which are both holistic and gender-sensitive, resulting in the spill-over of positive outcomes into the peace and security landscape.

“Building trust and friendships through partnerships and maintaining peace and security require what I would call the 5 Ps – Patience, Persuasion, Prevention, Passion and Perseverance. And I believe we women hold these qualities in abundance,” she said.