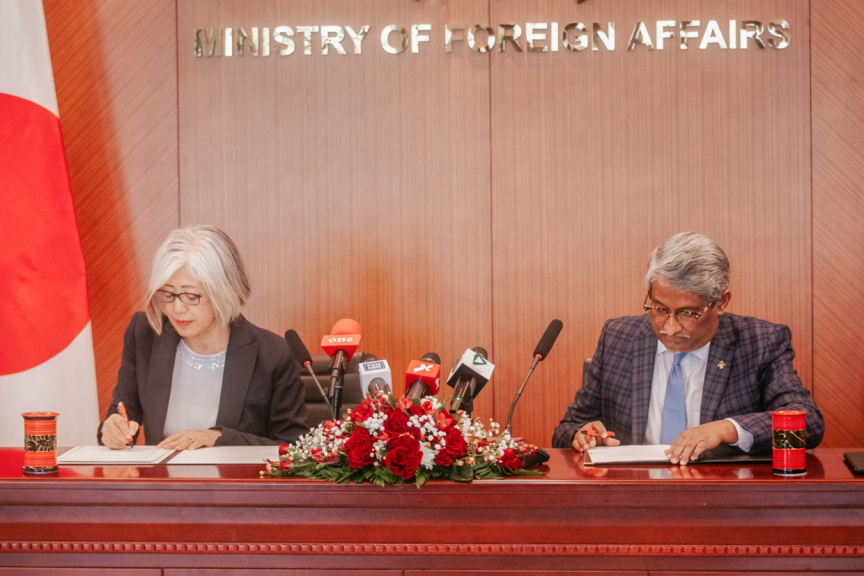 Minister of State for Foreign Affairs Ahmed Khaleel (R) and the Ambassador of Japan to the Maldives, Takeuchi Midori (L) signed the Exchange of Notes relating to the grant aid. (Sun Photo / Mohamed Hayyaan)

During a special ceremony held at the Foreign Ministry, the Minister of State for Foreign Affairs Ahmed Khaleel and the Ambassador of Japan to the Maldives, Takeuchi Midori signed the Exchange of Notes relating to the grant aid.

The grant is aimed at promoting economic and social development in Maldives, and will be used to further strengthen the resources and operational capabilities of the Marine Police and Traffic Police of the Maldives Police Service (MPS) .

This included the provision of marine vessels, that will be utilized in countering terrorism, drug trafficking, and other illicit activities in the maritime domain.

Moreover, the funds would also go towards procuring modern traffic management equipment for Traffic Police, in order to improve the enforcement of road-side regulations and services to the general public.

Speaking at the ceremony, State Minister Khaleel highlighted the generosity of the Japanese government and thanked them for the grant aid.

He also emphasized the close and friendly relations that exist between the two countries and added that such projects reflect Japan’s continued role as one of the key partners in Maldives’ development journey.

After the ceremony, while sharing information with the press, the Commissioner of Maldives Police Service Mohamed Hameed expressed renewed hope for the agreement.

“The safety of the Maldivian waters will be enhanced for sure. With more vehicles, and amount of work done will also increase,” said the Commissioner.

Meanwhile, Ambassador Midori said expressed happiness over the agreement signed for the protection of Maldivian waters.

“This is being done for the safety and protection of Maldives. [I] am satisfied and happy with the agreement.”