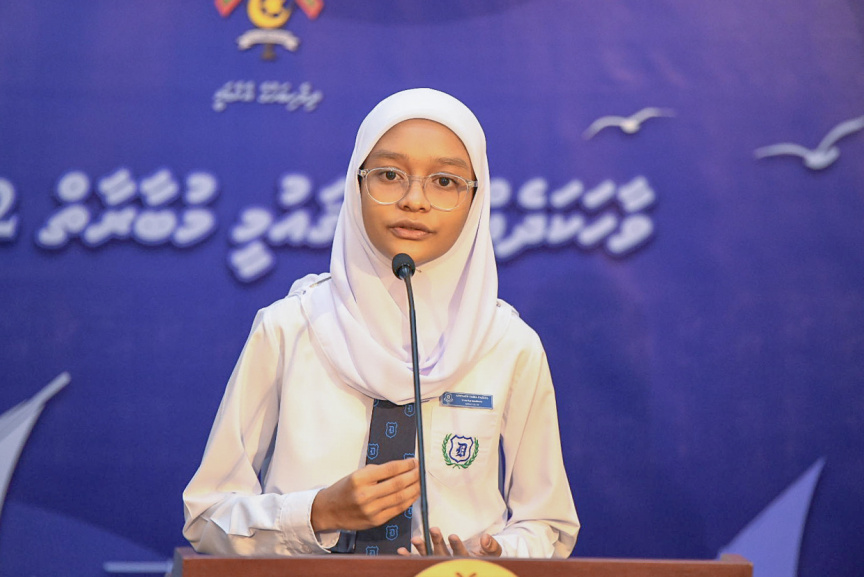 The top ten students have been selected from the lower secondary category in the 35th national oratory competition underway in memory of Uz. Ibrahim Shihab.

Dhivehi Bahuge Academy’s vice president Zulfa Ibrahim told Sun that the debate segment has begun with the conclusion of the speech segment.

120 students from 25 schools are taking part in the competition this year.

The top ten students will go to the next round, in which they will take turns speaking on the topics given, and then be required to speak on quick topics using general knowledge and their own opinion.

“The purpose of including quick topics in this year’s national competition is to develop the students’ inherent oratory skills,” said Zulfa.

Students are participating from schools in six atolls this year. They are:

Zulfa said the participation of teams from schools in the atolls has increased the competitiveness.

Fuvahmulah School’s leading teacher Aslam Hussain said it was the first time for the school to join the competition.

“This competition provides a huge opportunity to students. The students have received a huge assurance. This proves these students have oratory skills,” he said.

Imaduddin School’s leading teacher Faisal Zaheen said he was satisfied with the arrangements for this year’s competition.

“One of our special needs students spoke in this year’s competition. I am very satisfied with the performance,” he said.

“I believe this competition will produce students who have oratory skills and are ripe for it,” he said.

The debate segment for offices, clubs, and organizations is currently underway in the competition, while the next round for top ten students in lower secondary and second round for higher secondary students will be held tonight and tomorrow night.

Dr. Ashraf: There must be more Dhivehi-medium subjects