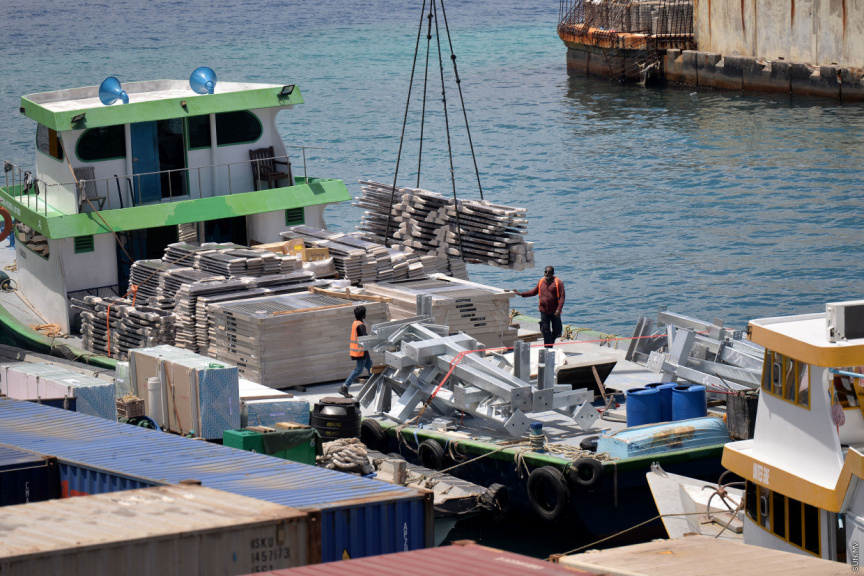 Workers load cargo to a boat at the Male' Commercial Port on April 5, 2020. (Sun Photo/Fayaz Moosa)

Maldives has recorded a 37 percent increase in import-export revenue in April 2022, compared to the same period last year.

The monthly statistics released by Maldives Customs Service on Saturday show that the authority had earned MVR 362 million in revenue from import-export during last month. The amount stood at MVR 265 million during last year’s April.

As per the statistics, goods worth MVR 231 million were exported from the Maldives in April 2022; amounting to a 36 percent increase compared to goods worth MVR 170 million exported during April of last year.

Frozen skipjack tuna or stripe-bellied bonito was identified as the most exported commodity in the month of April. In this regard, frozen skipjack tuna valued at MVR 96 million was exported in April. Meanwhile, MVR 27 million worth prepared or preserved skipjack was exported taking second place in the list of most exported commodities. Third on the list frozen yellowfin tuna; valued at MVR 26 million.

The highest number of exports were made to Thailand; being 62 percent of total exports.

The highest number of imports were made from Oman; being 30 percent of total imports.

Customs recorded the arrival of 109 vessels and the departure of 128 vessels in April 2022. The authority received MVR 8.9 million as royalty fees.

Inthi breaks silence after loss: Will stand with party