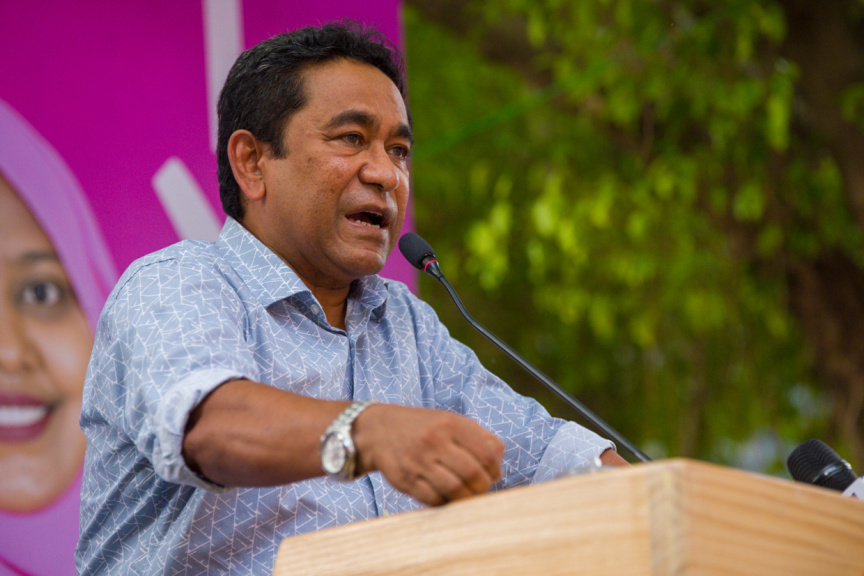 Underscoring that the main ruling party, MDP’s symbol is a scale – Yameen stressed that the two leaders of the party were standing on opposite sides of the scale at present.

With reference to impending MDP’s internal election – Yameen said stressed that there were divisions within the party, and its scale now needs to be balanced by PPM.

“The scale needs to be balanced by PPM. MDP candidates are also now under the impression that PNC's Abdul Raheem and PPM's President Yameen are supporting a particular candidate for MDP’s chairperson post,” he had said.

Yameen’s remarks come at a time Economic Minister Fayyaz Ismail has raised concern over the voter’s registry of MDP’s internal election – alleging it is comprised in a manner the election can be influenced by PPM.

Speaking at a campaign event at ADh. Mahibadhoo, Fayyaz claimed that 20,000 members belonging to PPM are eligible to vote in MDP’s internal elections.

“Whilst we (our party) has 94,000 members – there are 20,000 PPM members that can vote in this party’s internal election to elect a presidential candidate, or candidates for national council or the parliament,” he had said.

“Therewith, aren’t they the ones making decisions for this party?” he questioned.

Stressing the need to change this – Fayyaz pledged that he would do so if elected as the chairperson.