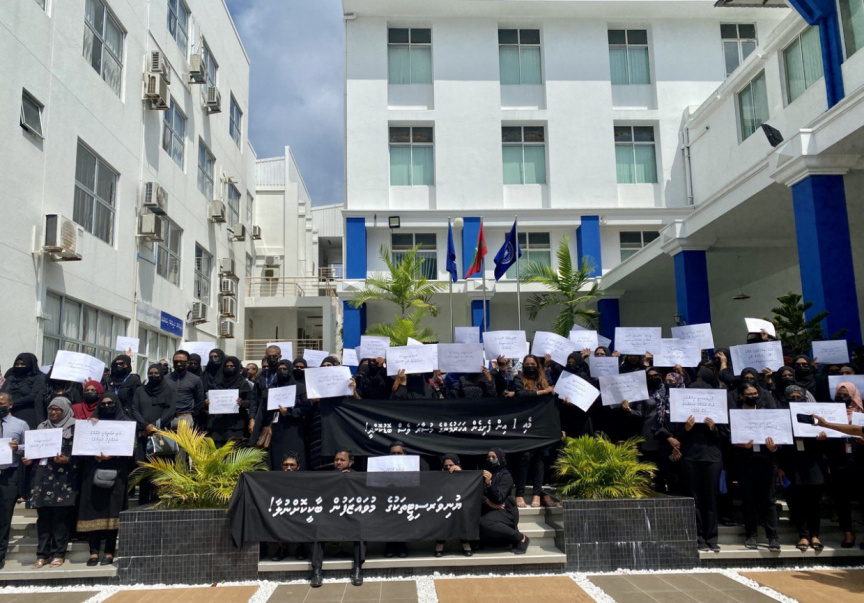 Maldives National University (MNU)’s staff wore black on Sunday, in a silent protest urging authorities not to differentiate against them, and authorize a salary increment.

A large number of employees took part in the protest, which took place at MNU campus in Male’ City on Sunday morning.

The employees held up signs expressing their sentiments in the protest, which lasted approximately half an hour.

A lecturer who played a key role in organizing the protest, Azeeza Afeef told Sun that MNU has an advice committee on salary matters, with representatives from each faculty.

“We have been patient for very long. It has been ten years. How are we to live on 10-year-old salaries,” she said.

Azeeza said that they were demanding that the government also increase the salary of university employees when the salary increment for school employees kicks in on May 1.

President Ibrahim Mohamed Solih had announced a salary increment for the salaries of public school teachers on May 1, on occasion of the International Workers’ Day.

With the change, most teachers will hereafter receive a monthly salary of MVR 20,000.

Azeeza said she has spent 30 years in the education sector. She believes the teachers who she once taught earning a higher salary than she herself to be an injustice.

“The students we taught will receive MVR 20,000. But we do the same work. I am now questioning what I’m doing. Have I not been teaching for 30 years?” she said.

Many of the participants of the protest said they were happy with the salary increment to teachers. Because the teachers in question were taught by the lecturers.

“Our complaint isn’t the salary increment for teachers. We are asking not to sideline us,” said one protestor.

They also expressed concern that while the university’s council has decided to implement a salary increment, the decision is on hold by the Finance Ministry.

Finance Minister Ibrahim Ameer told Sun last Wednesday that the government was working on granting a salary increment to lecturers, along with teachers.

Ameer said the Finance Ministry was working on a new salary structure for lecturers.

“The work has been done with MNU. We have shared it with MNU, and gotten their comments,” he said.

MNU to hold job festival on May 31