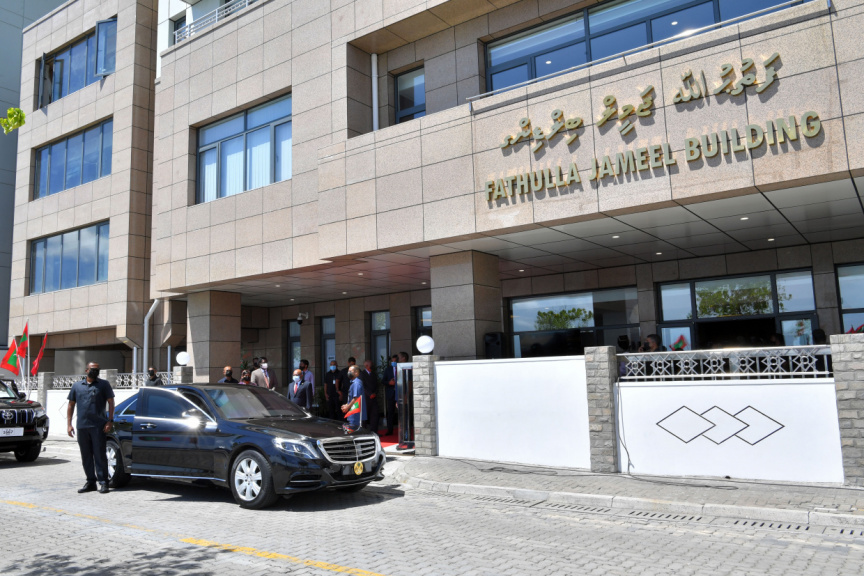 A capture from the inauguration ceremony of 'Fathulla Jameel Building', the new Foreign Ministry building, on July 15, 2021. (Photo/President's Office)

Parliament, on Monday, has passed the bill proposing the amendment to the Foreign Service Act which would transfer the salary allocation of foreign service employees to Finance Ministry.

The bill proposing amendments to the Foreign Service Act was submitted to the Parliament by Dhuvaafaru MP Mohamed Ismail, on behalf of the government. Following their review of the bill, Foreign Relations Committee had decided to pass the bill as submitted.

At today’s parliamentary sitting, the bill was passed by the unanimous votes of 44 members who took part in the voting.

Prior to this amendment – the salary and allowance structure of foreign service employees is formulated by the President’s Office. With this amendment – the work will be carried out by Finance Ministry in accordance to a policies set down by the National Pay Commission.

Maldives Foreign Service Act which establishes foreign service as a separate service from civil service was ratified by President Ibrahim Mohamed into law in last November. The Act will come into force in May 14.