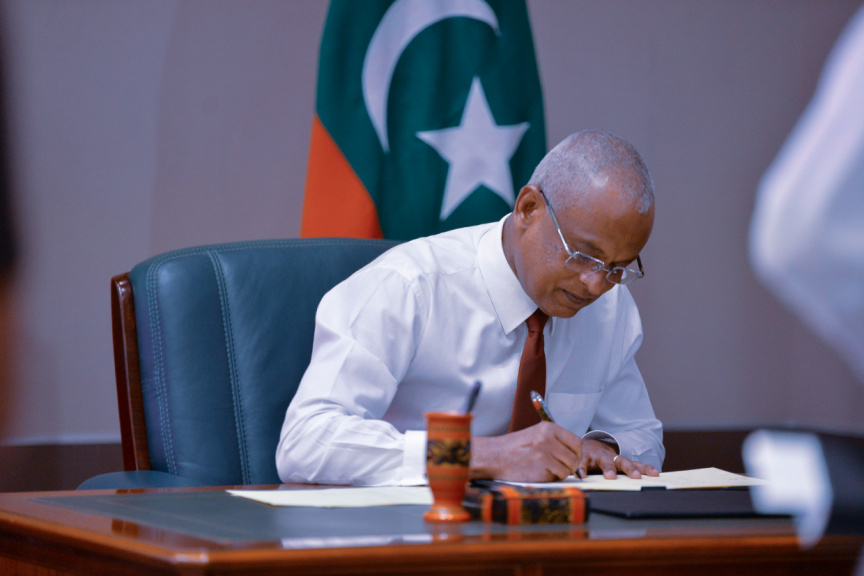 President Ibrahim Mohamed Solih, on Sunday, has given ratification to Maldives Foreign Service Act (Act no: 20/2021) – which establishes foreign service as a separate service from civil service.

The bill regarding the Act was proposed to the Parliament by South Henveiru MP Hussain Shaheem (An’dhun Hussain). Parliament passed the bill on October 27, at the 31st sitting of its third session of this year.

Maldives Foreign Service Act governs the establishment of a separate entity titled ‘Foreign Service’ for the purpose of implementing the foreign policy of Maldives. The act specifies it organizational structure, management policy, and matters relating to diplomatic cadre.

As per the Act, Maldives Foreign Service will embody the ministry and oversee all Maldivian missions and consular posts. It is also dictates that the President is the highest authority tasked with overseeing and directing the Maldives' foreign policy, with the Minister, under guidance from the President, being authorized to manage the daily execution of the service.

According to the Act, Maldives Foreign Service must be established within 90 days from the date on which the Act comes into force and must consist of executive service staff and general service staff.

It also stipulates that all the functions of the Foreign Service Institute under the Ministry will be transformed into an institute empowered under the Act, upon its enactment.

Following the ratification of Maldives Foreign Service Act – it has now been published in the Government Gazette and is schedules to come in effect six months from today.