Auditor General: Deficit expected to climb by a billion if budget is passed as it is 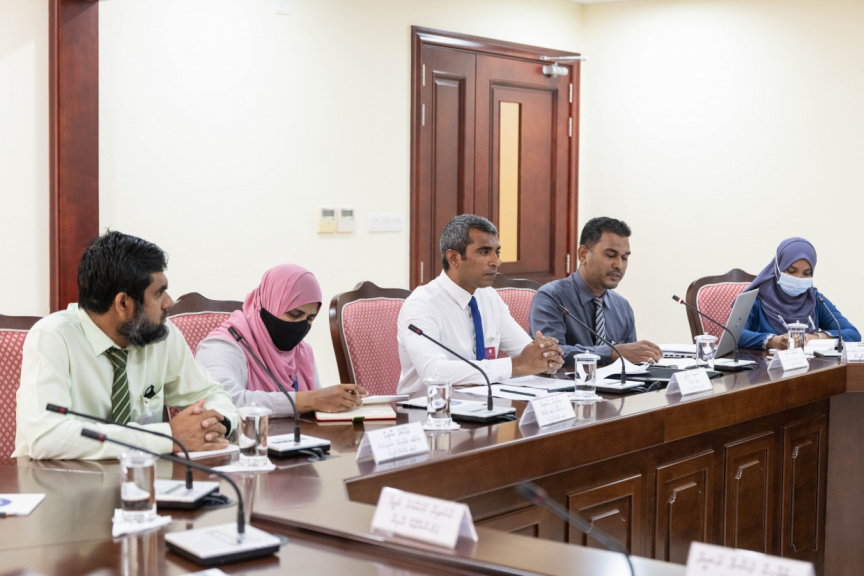 Auditor General's Office presents their review to state budget for the year 2022 to Parliament's Budget Committee on November 14, 2021. (Photo/People's Majilis)

Auditor General Hussain Niyazy has stated that if the budget proposed by the government for the next year is passed as it is, a billion would accumulate to the deficit.

Sharing Audit Office's review on the budget -  Audit Office Director, Mohamed Shaan said that there would be challenges in receiving income from the tourism sector due to travel restrictions.

Implementation of new revenue measures should be fast-tracked

"The experiences from previous years tell us a large proportion of the year will have passed by the time these amendments are made, So, the amount of income budgeted will not actually be generated," he added.

In this regard, Shaan stressed that amending the laws to ensure that the budgeted income is generated should be fast-tracked.

In their review, Audit Office also highlighted that although it is projected in the budget to receive income from leasing reclaimed lands on a real estate basis and leasing islands for resort development, investors are reluctant to show support for it.

Therefore, they recommended reviewing the obstructions faced this year pertaining to letting lands and islands and proceeding with it by coming up with ways around these obstructions.

"Land reclamation process is quite a time-consuming one. It can only be done with huge investments. The proposed budget states delegating this work to Maldives Fund Management Corporation - after which the interim dividends received to the company to be entitled to the government. If this is carried out without planning ahead of time, it poses a huge to the government," he added.

A large percentage of grants not received during the past years

The 2022 budget projects MVR 2.9 billion to be received as free aid.

Director Mohamed Shaan stressed a large percentage of free aid was not received in the past two years.

"If you look at the past two years alone, over 50 percent was not received. Minimizing this risk will be proven difficult if not guaranteed in the early stretch of the year," he detailed.

MVR 730.9 million is budgeted under Aasandha insurance scheme for 2022.

Audit Office said that MVR 1.2 billion has been spent under the Aasandha insurance scheme on an average within the last three years, including this year

They stressed that this is an increase of MVR 380 million than the average budget proposed for these years.

"Whilst MVR 730.9 has been allotted this year, there is a high chance of this increasing by (approximately) MVR 380 million if the measures mentioned in the budget are not implemented," he had said.

Increase in credit rate will aid in budget increase

As a total of MVR 13.4 billion is required to finance the budget, most of it is expected to be secured via foreign parties.

Therefore, Niyaazy advised prioritizing maintaining this ranking and carrying out Public Sector Investment Programs (PSIPs) in a manner that does not pave way for an additional deficit.

"The overall recommendation we are giving is that to move forward with projects as the state receives income. It is especially important to move forward as the reforms that are brought to improve grants. income and expenditure are realized," he had said.

'Dollar black market to be combated next year'