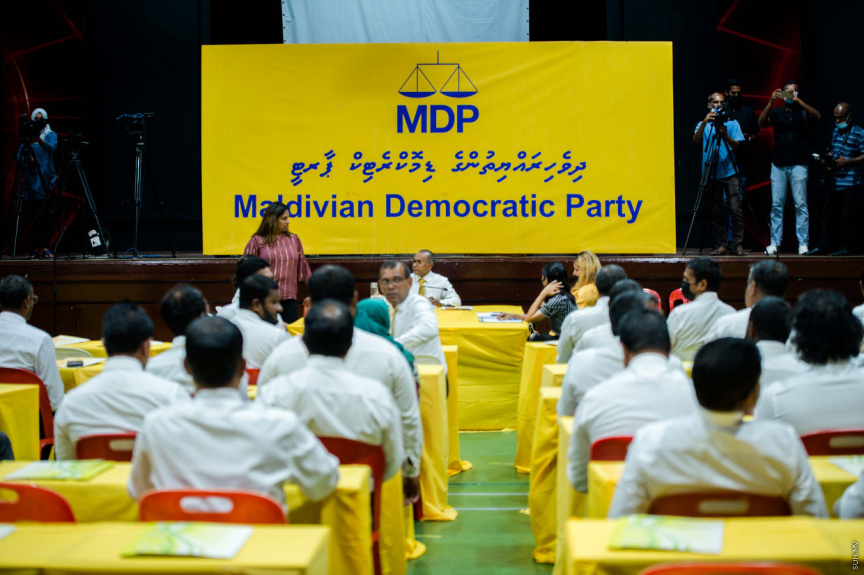 A capture from a National Council meeting of Maldivian Democratic Party (MDP). (Photo/MDP)

Election Commission decided against accepting MDP’s application form for the by-election as the deadline for form submission had already passed by the time the party had come to file the application.

Hawwa, who expressed interest in competing in the election on behalf of MDP, told Sun that the circumstance was a result of MDP’s MDP’s Vilimale’ constituency President Firuzul’s carelessness and negligence.

“Lost the chance because, as the criminal record form needs to be filled, I went to the Judiciary yesterday morning. Then went to Corrections. Both institutions have to fill out the form. But the power went out at Judiciary. So got the filled forms back past 12:00pm. Then went to Election. Because all the information had not been filled in, they rejected it. The real issue was the power outage there as well,” she detailed.

Whilst MDP has lost the chance to compete in the by-election for the vacant seat of Vilimale’ representative in Male’ City Council’s WDC – opposition Progressive Party of Maldives (PPM) and Maldives National Party (MNP) who had put forth their applications prior to the deadline will go head-to-head in the by-election.

Deadline to submit application to compete in the by-election for the vacant seat of Vilimale’ representative in Male’ City Council’s WDC was set for 12:00pm on Thursday.

However, MDP only opened applications for its members to represent the party in the by-election on Wednesday.

Vilimale’ seat in Male’ City Council’s WDC became vacant with the death of Aminath Eman, who was holding the seat. Eman passed away on March 1, whilst on ventilator at ADK Hospital after sustaining critical injuries in a road accident in Hulhumale’ on February 27.

She was elected to the seat on MDP’s ticket.