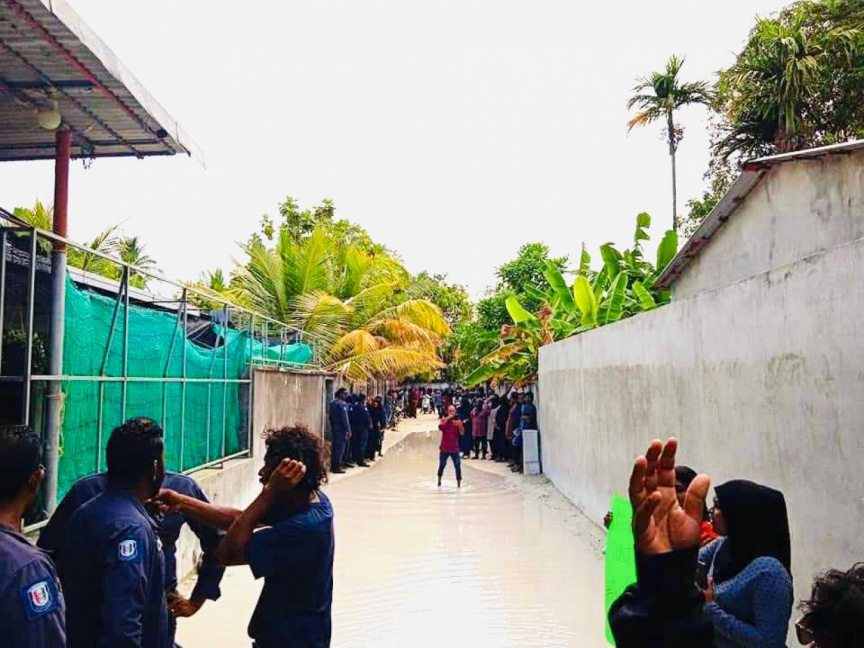 Protests have been ongoing in Hithadhoo, with protesters stating that having not arrested the grandfather, authorities were making an innocent person suffer in jail. (Photo/Social media)

The family of the detained woman in the sexual abuse case in Addu City has claimed that it was the 6-year-old’s grandfather who abused the minor - stressing the woman was wrongfully arrested.

The 59-year-old woman was arrested on Thursday, and the Hithadhoo Magistrate Court remanded her in police custody pending outcome of trial.

Speaking to Sun, a member of the woman’s family said that both Ministry of Gender, Family and Social Services and Maldives Police Services took the statement of the child.

“When the child’s statement was taken yesterday, she said it was the grandfather that did it. That grandfather was the one to hurt [her].”

The woman arrested was working as a caretaker in the school attended by the child.

During the school session, she had escorted the child to the toilet. Police allege that it was during this time that she was abused.

However, the family of the accused claim that the injuries sustained by the child could not have been inflicted from a single interaction and that the doctors report back the same as well. Hence, there is no room for their family member to be accused even, they claim.

“While the doctor's report clearly states this, how can such accusations be directed at our sister. When questioned by Police and Gender, the child has said that the injuries were not from (our) sister. It was the grandfather who did it. So, is there any room for questions in this?”

The family member went on to state that while she was sweeping the grounds along with other workers, one of the teachers brought the child, and asked to escort her to the toilet.

“While (our) sister took her to the toilet and was waiting outside the door, the child called on her own saying that she was in pain.”

The family further stated that the child gave her account of the incident after the court had ordered her to be remanded until the end of the trial. Despite this, the authorities have made no effort to release her.

They claim that she was being framed, and being treated unjustly.

Moreover, they noted that due to knee problems, she faces some difficulties in walking. The family claims to have now received information that she has been unable to walk after her arrest.

They detailed although requested home confinement for their family member, both Police and Courts have declined their request.

Protests have been ongoing in Hithadhoo, with participants stating that having not arrested the grandfather, authorities were making an innocent person suffer in jail.

The protests took place in front of the grandfather’s house, and ultimately, Police intervened and put up barricades, cordoning off the area.

The lady’s family also accused that the grandfather was not arrested due to connections with politically influential individuals and that his children were currently trying to fly him out of the country.

“There is nowhere left for us to go in this country to seek justice. No parliamentarians representing Addu have expressed concern and attempted to provide any assistance to us.”

Additionally, the family revealed that they had to resort to taking a loan in order to hire a lawyer to fight this case.

When questioned regarding this case, a media official from Police said that they have not yet received substantial evidence against anyone else apart from the person in custody.

Furthermore, the official noted that this was an open investigation and that as it proceeds and more details come to light, they will take action against anyone if needed.

'Not authorized to hold fireworks at political events'