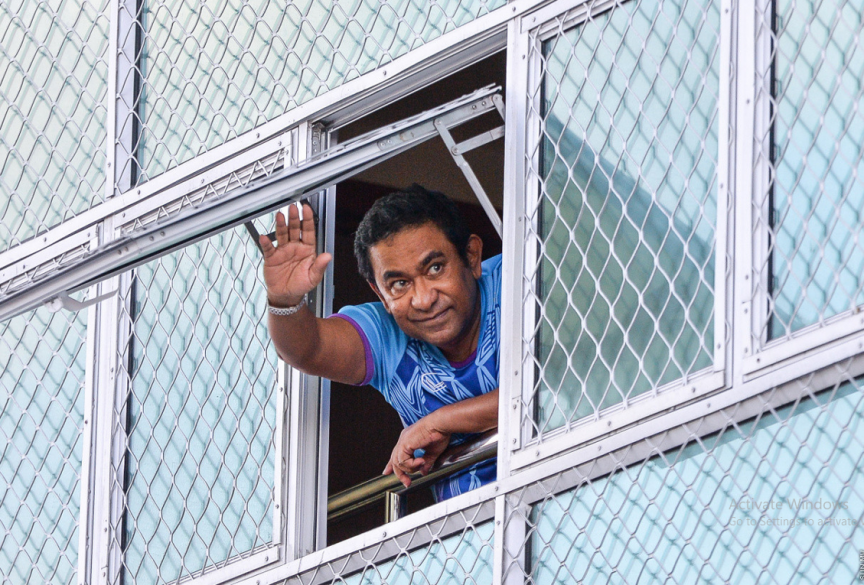 Opposition coalition has stated that their leader, former President Abdulla Yameen Abdul Gayyoom was unable to take part today’s mass rally at Male’ City over the non-approval of his participation by his security personnel.

‘Neyva Holhiah’ mass rally presently being held at Male’ City, is part of the activities of ‘India Out’ campaign spearheaded by Yameen. The opposition coalition, composed of Progressive Party of Maldives (PPM) and People’s National Congress (PNC), are holding the mass rally despite warnings by the police against holding it.

Whilst a large number of individuals belonging to PPM/PNC were seen taking part in the rally, opposition leader Yameen had failed to show.

Talking to Sun regarding Yameen’s absence, PPM’s Spokesperson Heena Waleed said that Yameen takes part in rallies with approval from his security personnel. She detailed not having received approval to take part in today’s mass rally as the reason for Yameen’s absence.

The police, in a statement on Wednesday evening, warned they will not allow for the rally to be held, citing that there were multiple reasons to believe the opposition isn’t planning to hold the rally under Freedom of Assembly Act.

Police warned they will dismantle the rally and take action against protestors.

Whilst the rally was set to start at 4:00pm in the evening, Police had cordoned off the area in which PPM’s headquarters are located starting from 2:00pm this afternoon.

Prior to the commencement of the rally, Male’ City Deputy Mayor Ahmed Nareesh was also arrested.

Yameen: India should be outed by the end of this year