Yameen: Everyone in government slaves of India 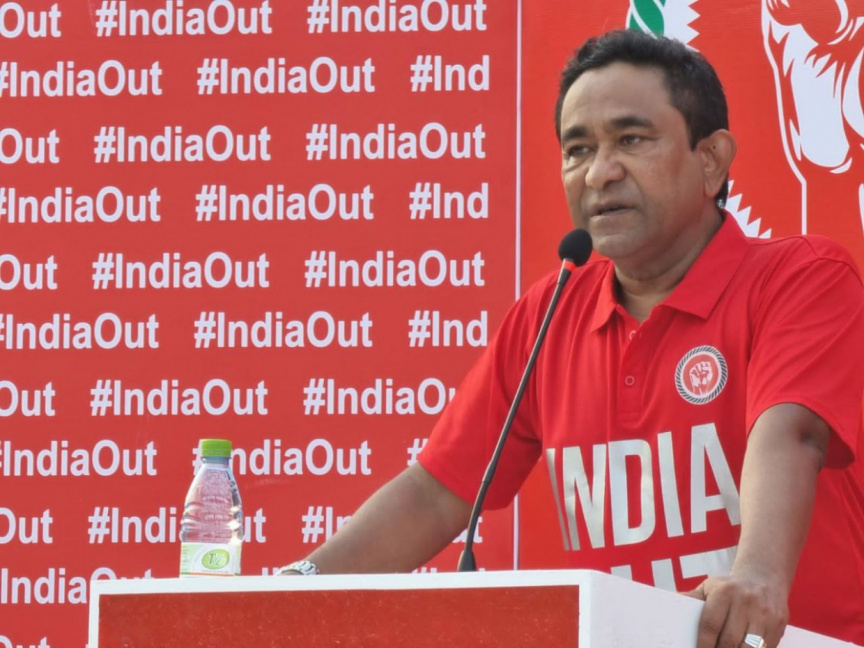 Former President Abdulla Yameen Abdul Gayoom on Saturday said that everyone in the current government was a slave of India.

Speaking at a gathering held as part of the opposition’s ‘India Out’ campaign protesting against the presence of the Indian military in Maldives, the former President said that only a few were aware of all the agreements made with India.

“There are hidden parts of the agreement. [The government] is trying to prevent those hidden details from coming out. Those who know are aware of it. I am among those who know about that.”

Yameen noted the government's denial of Indian military, particularly any armed military personnel’s presence in the country. He added that the government claims that the soldiers present were only technical experts.

However, he said that there were no signs of the technical work done by those experts, and went on to say that though their helicopters fly across Maldives, they have yet to be utilized even in the transportation of a sick person.

In addition to this, Yameen said that the Minister of Defence Mariya Didi need not respond to his comments as she had previously abused the Constitution, and had even stood on it – while she was a Parliamentarian.

He further stated that it was Generals from Maldives National Defense Force (MNDF) that should be responding to him. He called on the generals to host a press conference regarding the issue.

“Respond to the things I am saying in an open press conference. Media should be allowed in. Journalists should be able to ask whichever questions they want. Clear answers should be provided to their questions.”