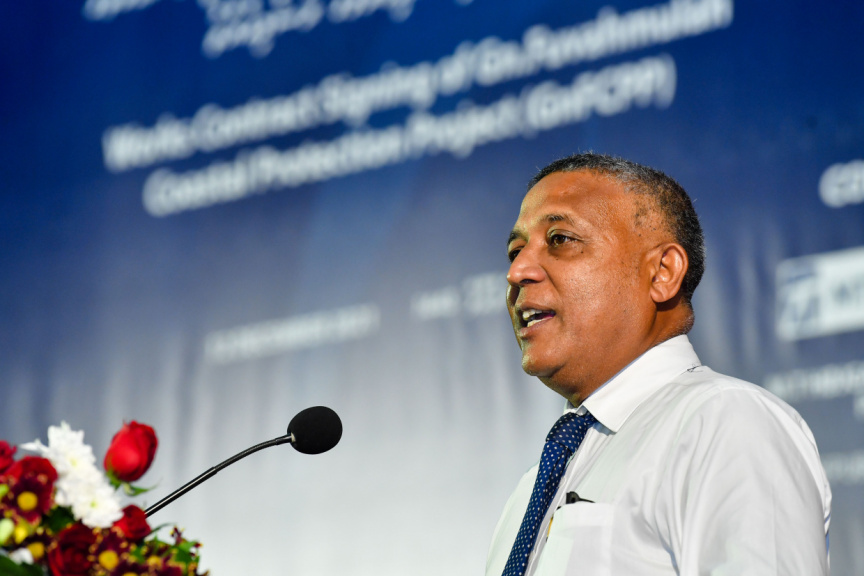 Minister of Housing Aslam speaking at the ceremony held to hand over the 100 housing units build in Lh.Naifaru to the island council. (Photo/ President's Office)

The Minister of National Planning, Housing and Infrastructure Mohamed Aslam said that they have never touched a single laari from the government money.

Addressing the ceremony held on Saturday to hand over 100 housing units build in Lh.Naifaru to the island council, Minister Aslam said that this administration was ‘honest.

He added that they spend their days and nights working for the good of the people.

Speaking in this regard, Aslam stated he would work towards finding a solution for the transportation issue faced by the people of Lhaviyani Atoll.

“I will ensure that this Atoll is the first one on the list for the project to link all of Maldives.”

He further noted that when the transportation issue is resolved those working at Lh.Felivaru will be benefitted as well.

Moreover, Minister Aslam revealed that work was progressing fast on issuing ‘Gedhoruveriyaa’– the government’s national housing loan scheme, and so far, 29 applications have been approved.

Noting that there are delays in issuing the loans, he said that this was due to citizens having to come to Male’ for paperwork. He added that handing over power of attorney to some close contact residing in Male’ would resolve this issue.

Speaker: Planning Minister must be investigated

'I have never seen a time of such rapid development'

"Remainder of term President will be opening places"

'No plan of making migrants to Male’ eligible for land'

'Platform incident no cause for bridge project delay'