MNP against bill to stop ‘India Out’ campaign 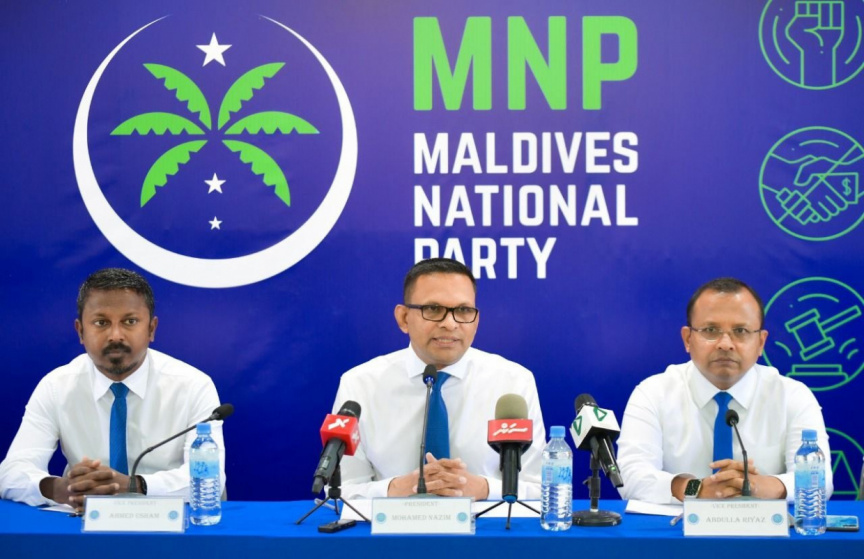 Leading members of MNP during the party's press conference. (Photo:MNP)

Maldives National Party (MNP) stated that the party will not support the bill Maldivian Democratic Party (MDP) is drafting to criminalize the opposition coalition’s ‘India Out’ campaign.

MDP’s Parliamentary Group on Wednesday decided to submit the bill the Parliament at the earliest to draft a bill that would allow criminal punishment against individuals acting and talking in a manner that disrupts diplomatic relations, and pass it into law.

During a press conference held by MNP today, responding to a question by ‘Sun’ regarding the party’s stance on the bill, the party’s President Colonel (Rtd) Mohamed Nazim branded it as an obstacle to the freedom of expression.

He noted that everyone must respect the right to freedom of expression granted under Article 27 of the Maldivian Constitution. Hence, he does not believe that a bill that obscures that right should be passed into law.

“This party does not support hurting any individual. Some parts of the bill allow criminalization and jailing when some words are said.”

“We held a Parliamentary group meeting yesterday as well. We decided that we don’t believe those things cannot be stopped with a bill. So, we do not support it.”

Additionally, Nazim noted that MNP will not support anything that stops freedom to express, and that they will always advocate for things while keeping citizens a priority.

“We want to see a day where people can speak their mind. In a government of this party, God willing, people will be to say what they want. That independence will be given.”

“If details of all agreements are shared in a transparent manner, there will be no reason for people to be suspicious. Popel are talking because it was not done like that.”

As per the current draft of the bill, individuals found guilty of acting in a manner that disrupts diplomatic relations can be sentenced to jail for a period of six months or sentenced to home confinement for a period that is not longer than one year. They can also be fined up to MVR 20,000.

‘India Out’ campaign which is spearheaded by opposition leader, former President Abdulla Yameen Abdul Gayyoom has been expanded across the country, with supporters graffitiing walls of their houses with messages pertaining to the campaign.

Yameen has stressed that passing a law will not stop ‘India Out’ campaign.

Nasheed pushes for date for referendum on govt. system