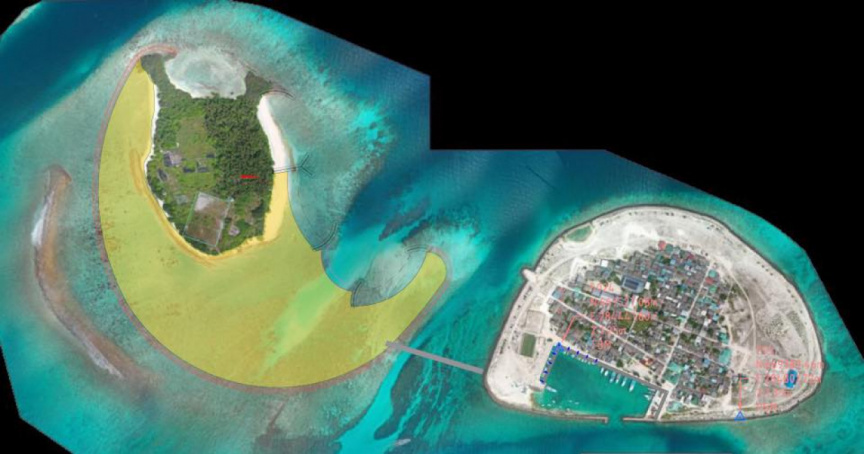 A plan of Sh. Komandoo and Mathi Komadoo connectivity project.

Anti-Corruption Commission (ACC) revealed a complaint of attempts to influence the by-election for Komandoo constituency with the Komandoo-Mathi Komandoo linking project.

Speaking to ‘Sun’ a media official from ACC said that this was the only complaint they’ve received so far in connection to the upcoming election. The official added that the complaint was about conducting projects there were not already budgeted, which was synonymous with an election.

However, ACC did not disclose the identity of those who submitted the complaint.

Physical work on the Sh. Komandoo and Mathi Komandoo Connectivity Project began on January 14. The project is valued at MVR 249.9 million.

Notably, despite complaints being submitted, a decision cannot be taken regarding the matter since at the moment there are no members in the commission.

Parliament’s Independent Institutions Committee decided in November 2021 that they would recommend the dismissal of members found to be underperforming following their review. Following its review – the Committee voted to initiate the process of dismissal of all members of ACC in early December as they uncovered the Commission had over 16,000 pending cases.

On December 26, 2021 the Committee recommended a vote of no-confidence motion on the Parliament floor against the ACC members.

The latest notice by President’s Office extended the application for ACC membership until January 31.

With the by-election for the Komandoo constituency looming closer, the opposition has been expressing concerns due to the lack of ACC members.

ACC staff to work from home as many tests positive