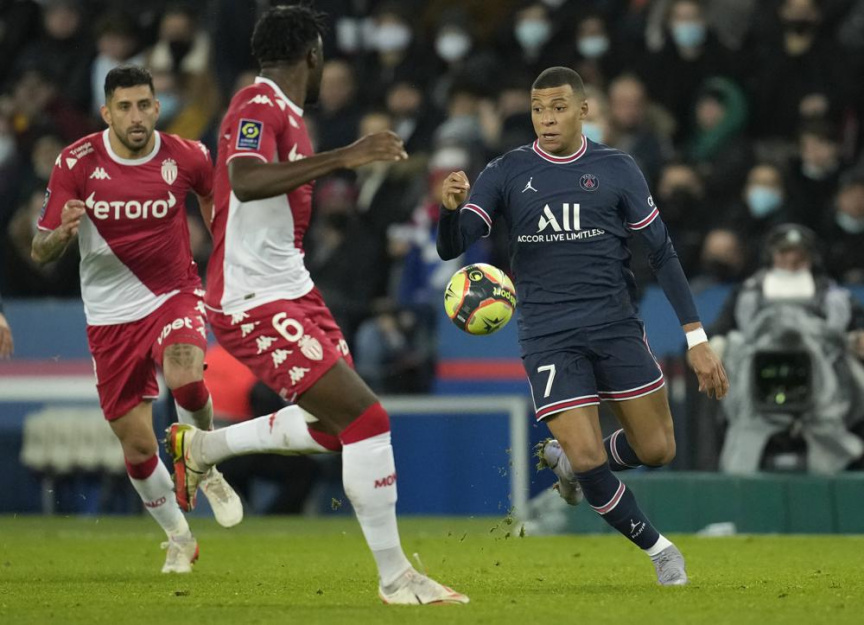 That was illustrated again when he grabbed a hat trick in the French Cup on Monday night.

It was against modest amateur side Vannes, but the quality of his finishing stood out regardless and took his overall tally this season to 18 goals in 25 games.

The trip to Lyon on Sunday in the league may prove more difficult for Mbappe, given how hard it was to beat Lyon in September. PSG needed a header from Mauro Icardi in the final seconds of stoppage time in that meeting.

Lyon dominated for spells and often gives PSG a hard game at home.

Lyon sits in a lowly 13th place, but PSG’s form has been patchy. For although Mauricio Pochettino’s side reached the mid-season break with a 13-point lead it was far tougher than it looks.

PSG won just two of its last five games and needed last-gasp equalizers against Lens and 19th-place Lorient heading into the winter break.

In 19 matches, PSG has scored 12 times after the 80th minute to underline how individual talent — allied to a strong bench that includes Icardi and Copa America winner Angel Di Maria — made the difference more than impressive teamwork.

The star of France’s 2018 World Cup triumph has nine goals and eight assists in the league. He is maintaining the superb form he showed throughout last season when he netted a career-high 42 goals in all competitions.

No wonder PSG is desperate for Mbappe to sign a new contract and not leave for free at the end of the season.

But while Pochettino waits to see what Mbappe decides, he can be pleased with what else he saw against Vannes: the impressive performances from 18-year-old midfielders Xavi Simons and Edouard Michut.

Simons made good runs and stood out with his technical poise and dribbling ability. He combined astutely with European Championship winner Marco Verratti to set up Mbappe’s second goal against Vannes.

Although Simons is Dutch, he has a Spanish-sounding first name.

For while Simons was emerging through the youth ranks at Spanish giant Barcelona, Xavi Hernandez ruled midfield during its glory era under coach Pep Guardiola and alongside Messi. Simons joined PSG two years ago and looks like a major talent.

He has more pace and athleticism than the slender Frenchman Michut, who displayed poise on the ball and a slick technique.

Pochettino gave them both a chance and they took it.

Previous PSG coaches have been criticized for overlooking young talents at the club and letting them go too soon. Leading a long list of players are Bayern Munich star winger Kingsley Coman and Juventus midfielder Adrien Rabiot, who both played for France at Euro 2020.

Coman, who scored the winning goal for Bayern Munich against PSG in the Champions League final in 2020, came through the club’s academy only to join Juventus when he was 18 after just four appearances.

Even prior to that, something was unusual about how the club recruited because Mbappe — who grew up in the Paris suburb of Bondy — went to Monaco before being signed by PSG for 180 million euros ($204 million).

And France great Thierry Henry grew up in the southwestern suburb of Les Ulis but went to Monaco at the age of 15.

World Cup winners Paul Pogba (Manchester United) and N’Golo Kante (Chelsea); Premier League winner Riyad Mahrez (Manchester City) and Anthony Martial (United) are all Parisians who never played for the club. Nicolas Anelka did breakthrough but the lightning-quick forward was sold to Premier League Arsenal at the age of 17.

Now Simons and Michut have a chance to stake their claims.