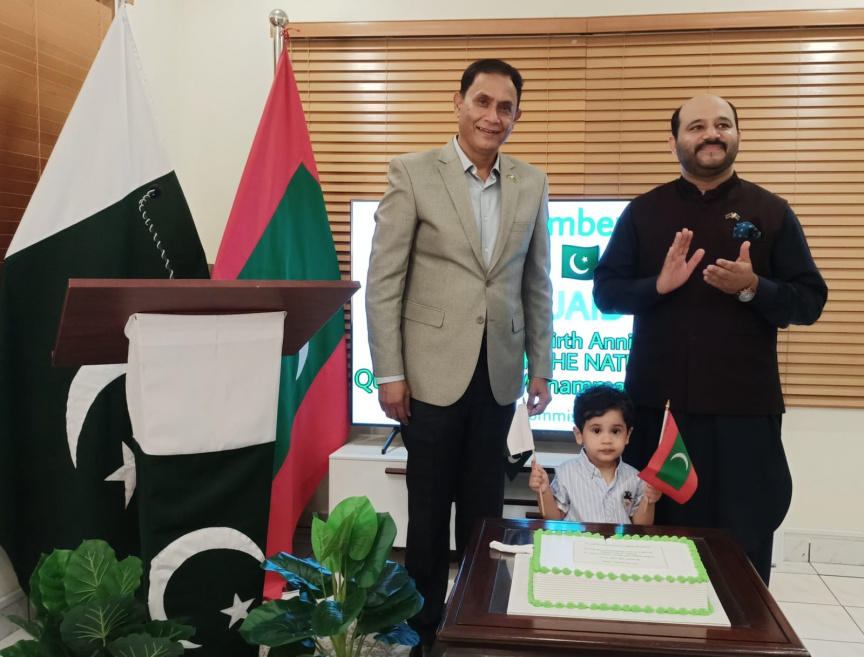 The Pakistan High Commission in Male’ held a ceremony on Saturday to celebrate the 146th birth anniversary of Quaid-e- Azam Muhammad Ali Jinnah – the founder of Pakistan.

Mukhtar said that Quaid-e-Azam Muhammad Ali Jinnah, had a vision for the Muslims of the subcontinent which got translated in the shape of Pakistan.

“Therefore, there is no other pleasure more real to us as a nation than the commemoration of his birthday. We owe immense gratitude, love and devotion towards our beloved leader Quaid-e-Azam Muhammad Ali Jinnah,” he said.

Mukhtar said there were few people in modern history who garnered such wide popularity.

"His determination to carve a nation out of chaos and relentless deprivation was miraculous and insuperable against all odds and challenges. He had a firm faith in God and His Prophet Muhammad (PBUH) which guided him through a long journey comprising of ordeals, deceptions and dejections but culminating in grandeur, décor and eternity," he said.

Mukhtar said that Quaid-e-Azam Muhammad Ali Jinnah wasn’t just a role model for Pakistanis, but for Muslims around the world because of the universal vision he instilled in the creation of Pakistan.

He also said that the founder of Pakistan set the framework for national behavior about the religious minorities in his last speeches by strongly emphasizing that “this country is for all segments of religions and everyone is free to go to his worship place whether it is temple, mosque or church”.

Mukhtar said that all Pakistanis, irrespective of their religious affiliation, were free to enjoy the teachings of their own religions in Pakistan.

He also took the opportunity to call on the international community to play their role and fulfil the promise made to Kashmiris for their right to self-determination in accordance with the UN Security Council resolutions.

"We Pakistanis, feel blessed to have opened our eyes in a free environment bestowed upon us by Allah through his chosen personality, who was none other but our beloved Quaid. The birthday of Father of the Nation, Quaid-i-Azam Muhammad Ali Jinnah (RA), is being celebrated with renewed commitment to work hard for progress and prosperity of the country,” he said.

He said that it was the dynamic and charismatic leadership of Quaid-i-Azam Muhammad Ali Jinnah, which made the creation of an independent state for the Muslims of the subcontinent possible.

"We also pay homage to the sacrifices by our forefathers in their struggle for freedom and independence,’ he said.

Ahmad urged the youth to adhere to Quaid-i-Azam Muhammad Ali Jinnah’s ideals of unity, faith and discipline in order to make Pakistan stronger and prosperous.

He also took the opportunity to commend Pakistani nationals working in Maldives for their role in the development and prosperity of Pakistan.

Pakistan HC: 48th OIC-CFM will be a landmark session