Few companies in Maldives can operate like FSM: Amru 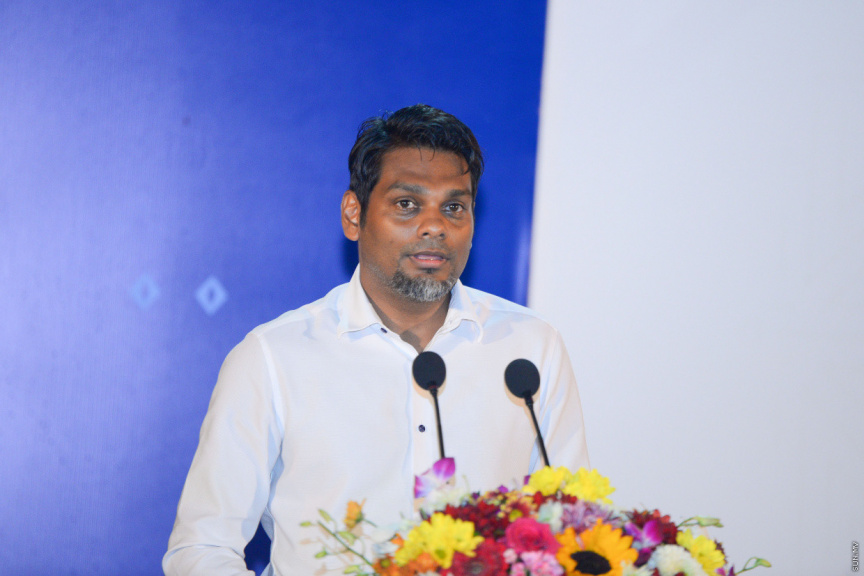 The CEO and Managing Director of STO Amru speaking at the ceremony held to rebrand FSM on December 18. Sun File (Photo/Fayyaz Moosa)

The CEO and Managing Director of State Trading Organization Hussain Amru said on Sunday that the operation of Fuel Supplies Maldives (FSM) was a large scale operation even at a global scale, adding that few companies in Maldives could operate in that manner.

Speaking at the ceremony held to mark the rebranding of FSM at Crossroads Maldives, Amru noted that the company has been providing fuel continuously to 300 islands, both residential islands and resorts.

He went on to say that Maldives was not a small country with both land and sea combined, the country was bigger than Singapore.

"About 99 percent of Maldives comprises of the sea. Hence most companies operate on land. But FSM operates on the 99 percent area, making this truly a big operation."

He reiterated the fact that despite the scale of the operation, the company provides fuel without interruptions across the country.

"This is attributed to the hardworking staff of FSM. So what we are saying is that most of these islands do not have large tanks for storage. For some islands, fuel needs to be transported daily or in some other cases every three days," said Amru.

Further highlighting the hard work of FSM employees, Amru noted that even during bad weather conditions when red alerts are issued, the fuel operation cannot be interrupted, nor was it stopped during the peak of the COVID-19 pandemic in the country.

"Employees were well aware that if they get positive, fuel operation would halt, and so they adhered to guidelines and did not get off from the vessels at all and kept on transporting fuel to the islands."

During the ceremony, after 21 years a new logo was unveiled, which according to the company depicts the chemical compounds of hydrocarbon. While the colours blue and orange are used, it represents Maldivian sea and the fuel supplied by the company respectively, and the white line shows the work done to provide fuel across the country.

Along with the new logo, a new company slogan “Fueling the Nation”, a new flag and uniform was revealed too. The flag was unveiled by FSM's Chairman Abdul Wahid Moosa.

A modern fuel shed to be built at Industrial Village

Fuel barge runs aground off Noomara

A self-service petrol shed to be established in Male'

Action against more employees of FSM regarding scandal

Petrol sheds to be open until 1:00 am during Ramadan