I was dismissed due to opinion differences on major issues: Dr Shamheed 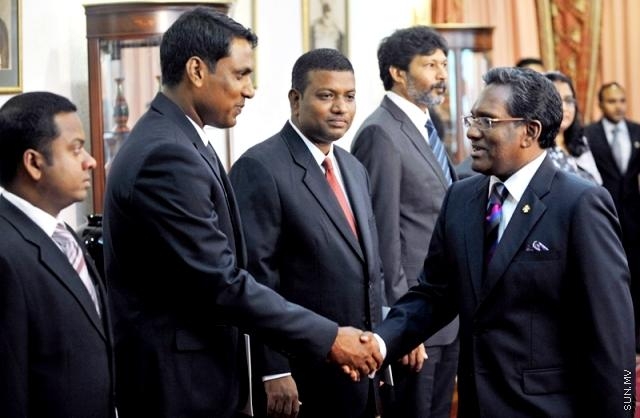 Former Minister of Transport and Communication Dr Ahmed Shamheed, who was dismissed abruptly from his post today, has said that his dismissal was due to differences in opinion with President Dr Mohamed Waheed Hassan Manik on some major issues.

In an interview with Sun Online shortly after his dismissal, Dr Shamheed said that he “challenged” President Waheed and Vice President Mohamed Waheed Deen on several issues while he was Transport Minister.

He mentioned the issue of Nexbiz and the recent sale of Addu Airport Company’s shares to Kasa Holdings as examples.

“I’ve even tweeted about those issues. I think there are differences in opinion on several policies. I don’t do these things in secret, I oppose publicly,” he said.

Dr Shamheed said that he is yet to receive the letter of dismissal. He said that he was aware of the fact that he might be dismissed when he expressed his honest opinions on those issues.

“You have to say it as it is. I don’t talk to please others. I will say what I have to say, even if it makes someone unhappy. Things got worse when I strongly opposed the border control and Raajje TV issues. Dissatisfaction was clearly implied,” he said.

When asked if his dismissal might be due to the bribery allegations against him involving GMR, Dr Shamheed said that those rumours are a ‘big joke’. He said that he does not believe that his dismissal had anything to do with those allegations.

“But at the latest Cabinet meeting, I was asked for advice by the Cabinet Secretary [Abdullah Nazeer] afterwards, how I would vote if a vote was taken on the GMR issue. I said I would vote to remove GMR. He asked me if I really mean that. I said yes, that vote would not go any other way. So – you can connect [my dismissal] with that incident if you want. But I’m not saying it can be connected,” he said.

Dr Shamheed said that he had not taken any action on the GMR issue without prior discussion with the President.

He noted that no permission had been given for the new terminal at the Airport.

Referring to the issue of extension of the lease period of Maamigili Airport, he said that nothing was ever bypassed on any policy issues such as that one.

He stressed that normal policies were followed in handling that issue.

“You see, the decision to allow instalment payments for resort lease extensions was also made by a group of Ministers, and it was implemented. And the decision to sell the shares [of Gan] to Kasa was also made one evening, and implemented the following night. But still permission wasn’t obtained. But we did that much later. So it has nothing to do with that. This is all political,” he said.

When asked if he had spoken with the President after he was dismissed, he said that “what happened after that is not important”.

He said that there is no point in sharing that information.

“That’s not important anymore. All I have to say is that even when I assumed the post, I wasn’t planning on being in politics for too long. I don’t even want to do that. I will return to the private sector. I haven’t done, or tried to do, anything illegal,” he said.