BML to refurbish and upgrade National Library to modern standards 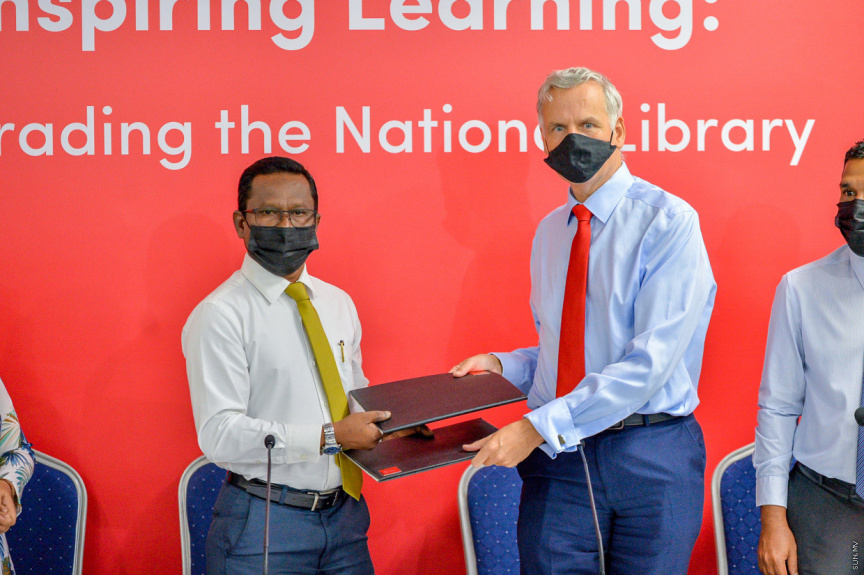 A capture from the ceremony held to sign an MoU between Bank of Maldives (BML) and Maldives National Library regarding the refurbishment of the library held on December 9, 2021. (Sun Photo/Mohamed Hayyan)

Bank of Maldives (BML) has announced its initiative to refurbish and upgrade the Maldives National Library up to modern standards.

A Memorandum of Understanding (MoU) pertaining to the project was signed during a special ceremony held at the National Library today. CEO, Managing Director Tim Sawyer signed the MoU on behalf of the Bank, whereas State Minister for Arts, Culture and Heritage Mohamed Thoriq signed on behalf of the Library.

As part of this project, BML will be revamping the Library’s main reading area, Kiyavathi discussion room, silent reading and research room, Makers Space room and the National Collection Room. They will also be upgrading the systems placed in the library for users.

Additionally, BML will also be donating a v-cradle book scanner required for the digitalization project of the Library.

Moreover, an audio and video booth installed with the latest technology will be established – and for the first time, security system will be installed at the Library.

Commenting on the project, BML’s CEO, Managing Director Tim Sawyer said that the Library is an important place to muster education skills in addition to being a place for people of all ages to seek information.

He also added that it is with pride that BML is able to carry out such a major development project for the national library in the capacity of the national bank.

This project is the second series of 12 high-impact monthly community initiatives to celebrate leading up to BML’s 40th anniversary in November 2022.

The first series was ‘BML Scholarship Fund’, which was announced in November.

The scholarship fund will provide fully-funded international scholarships for three students in the area of Banking and Finance on an annual basis.