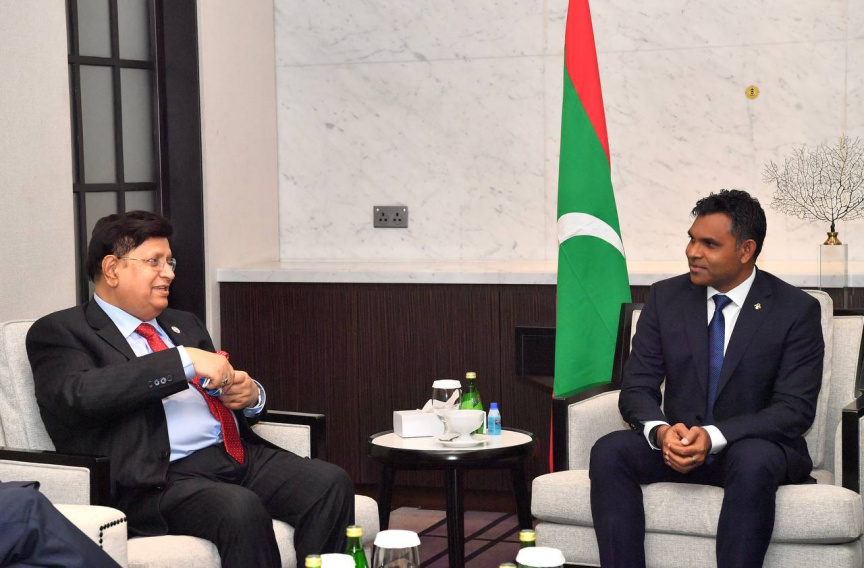 Momen made the appeal during a meeting with Maldivian Vice President Faisal Naseem – who is on a two-day official visit to Bangladesh.

During the meeting, which took place on Monday afternoon, Momen noted that Maldives hosts a large population of expatriate workers from Bangladesh. He asked the Maldivian government for assistance to register and regularize any unregistered Bangladeshis who may be working in Maldives.

Speaking further on the impact of the COVID-19 pandemic in Maldives, Faisal said that the pandemic served to reveal several challenges which need to be addressed, including the need to improve access to decentralized healthcare. He said that the Maldives government considers the provision of decentralized healthcare services across the country as an urgent need, and discussed cooperation between the two nations to achieve the goal.

Both Faisal and Momen spoke of the close friendship between Maldives and Bangladesh, and discussed strengthening the people-to-people and government-to-government connections between the two countries.

Following the call, the Maldivian delegation attended a special dinner hosted by Momen in Faisal’s honor.

Faisal travelled to Bangladesh on his two-day official visit, accompanied by a delegation of cabinet ministers and high-level officials from the President’s Office and the government, on Monday morning.

Prior to his meeting with Momen, Faisal visited the Bangabandhu Museum where he received a guided tour and signed the visitor's book. Following that, he visited the Bangladesh-Korea Technical Training Centre (BKTTC), where he was received by the Bangladeshi Expatriates' Welfare and Overseas Employment Minister, Imran Ahmad. He took a guided tour of BKTTC and discussed partnerships in developing technical capacity in Maldives, especially in the areas of healthcare and education.