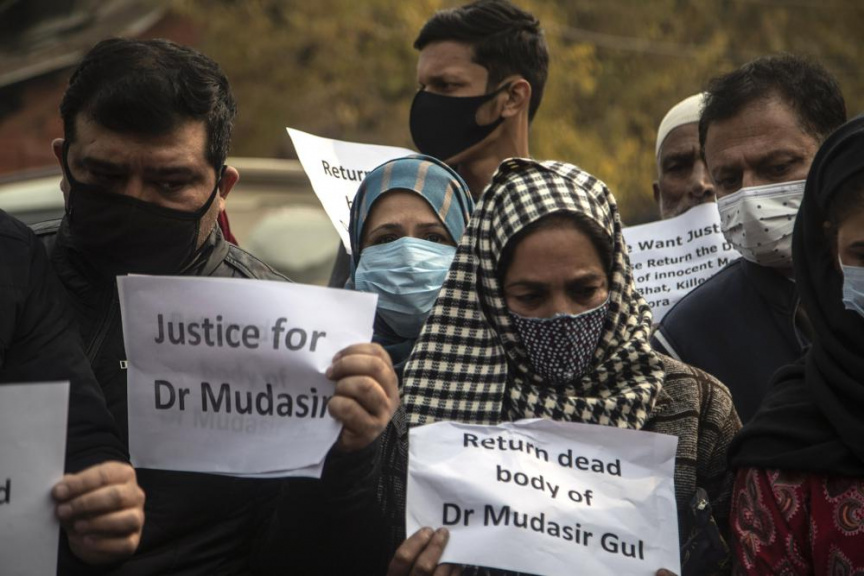 Family members and friends of two civilians who were killed in a gunfight, hold placards during a protest, in Srinagar, Indian controlled Kashmir, Wednesday, Nov 17, 2021. (AP Photo/Mukhtar Khan)

SRINAGAR, India (AP) — Police in Indian-controlled Kashmir late Wednesday detained over a dozen relatives of two civilians killed in a controversial gunfight, eyewitnesses said, hours after they staged a protest in the disputed region’s main city while pleading with authorities to return the bodies so they could bury them.

Police officials wearing flak jackets and carrying assault rifles swooped on a protest site in Srinagar minutes after lights were turned off in the locality. They dragged the relatives into a police van amid slogans by the family members in the freezing cold, eyewitnesses said.

In dramatic video clips that circulated on social media, one family member grabbed the barrel of a rifle from a police official and pulled it to his chest while shouting: “Shoot me, terrorists.”

Four people, including two civilians and two suspected rebels, died Monday night in a raid by government forces on alleged militants in Srinagar, police said. They said the rebels included a Pakistani citizen, but offered no evidence.

Police said the civilians died in the crossfire between government troops and the rebels. However, witnesses and families of the civilians said Indian troops used them as human shields during the standoff.

Indian authorities later secretly buried the bodies in a remote northwestern village as part of a policy that started in 2020. Since then, authorities have buried the bodies of hundreds of suspected rebels and their alleged associates, including civilians, in unmarked graves in remote areas, denying their families proper funerals.

The family members of the two civilians, identified as trader Mohammad Altaf Bhat and Mudassir Ahmed, a dental surgeon and real estate dealer, assembled in an area of Srinagar where several media offices are located and demanded the return of the bodies. They shouted slogans and some carried signs reading “Stop innocent killings & atrocities” and “We want justice.”

Saima Bhat, a relative of Bhat, said they had little hope of justice.

“Justice is a long journey. We just plead right now that the bodies of our loved ones be returned,” she said. “At least respect the dead and allow us to give them a dignified burial.”

The protest continued into Wednesday night and the victims’ relatives held a candlelight vigil despite the severe cold.

Also Wednesday, government forces were deployed in half a dozen villages in the southern Gool area to enforce a ban on the assembly of more than four people, after family members of one of the men slain in Monday’s raid threatened to block a highway.

The man, 24-year-old Amir Magray, whom police described as a militant, was a salesman at a shop in Srinagar, his father, Abdul Latief, said. Latief’s home has been protected by police guards since he killed a militant with a stone in 2005.

“Denial of the body of my son is the reward of the fight against terrorists. My home is still guarded by police,” Latief was quoted by New Delhi Television as saying. “Tomorrow the security guards can kill me and claim that I was a militant.”

Authorities say the policy of not returning rebels’ bodies to their families is aimed at stopping the spread of the coronavirus and to avoid potential law and order problems during funerals. The policy has added to widespread anti-India anger in the region and some rights groups have fiercely criticized the move, calling it a violation of religious rights.

Kashmiris for years have accused Indian troops of targeting civilians and committing abuses with impunity. Such allegations include staging gunfights and then saying the innocent victims were militants to claim rewards and promotions. Indian officials acknowledge the problem but deny abuses are part of a strategy. They say the allegations are mostly separatist propaganda meant to demonize troops.

Meanwhile, police late Wednesday said government forces killed five suspected rebels in two separate gunfights in villages in southern Kulgam district. A tweet attributed to the region’s head of police, Vijay Kumar, said one of the slain men was a local commander of the Resistance Front rebel group. Officials did not immediately provide any other details and there was no independent confirmation of the incidents.

Both India and Pakistan claim the divided territory in its entirety. Rebels in the Indian-controlled portion of Kashmir have been fighting New Delhi’s rule since 1989.