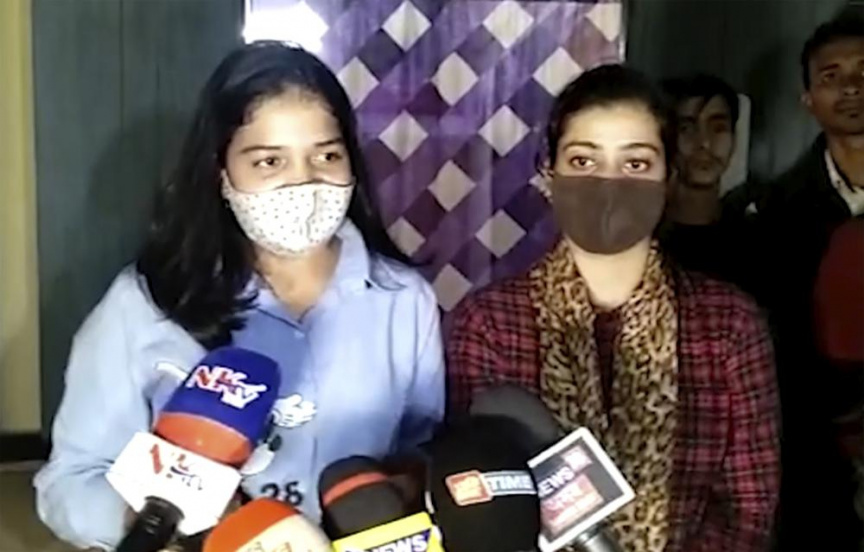 GAUHATI, India (AP) — Two Indian journalists who were detained over the weekend on charges of inciting communal violence after tweeting that religious attacks on Muslims were worse than police had reported were granted bail by a court in the northeastern state of Tripura.

Samriddhi K. Sakunia and Swarna Jha were reporting on religious tensions in the state, where there were attacks against minority Muslims last month. Police said at least one mosque and several shops and homes belonging to Muslims were vandalized, but reported no deaths.

The attacks were seen as retaliation for violence against Hindus in neighboring Bangladesh earlier in October. Tripura borders Bangladesh and Muslims make up less than 9% of its nearly 4 million people.

The court granted the journalists bail on Monday after the judge said “their detention was not required for the investigation as it would amount to infringement of their personal liberty,” Pijus Kanti Biswas, the lawyer representing the reporters, said Tuesday.

Police said they had detained the journalists for “inciting communal violence by posting false and fabricated news on social media.”

Their employer, HW News Network, a digital news channel, said the authorities were preventing them from doing their job, calling their detention “sheer harassment” and “targeting of the press.”

The two reporters arrived in Tripura last Thursday and began reporting on the aftermath of the attacks. Sakunia tweeted a series of videos and images of mosques that had been vandalized, including one that showed photos of broken windows and damaged interiors in an attack she said police had denied. She said she visited the Chamtila mosque in the town of Panisagar and alleged it had been vandalized. “Tripura police denied the claim saying nothing has happened of that sort. But my report from the ground says otherwise,” she said in a tweet Saturday.

Sakunia later tweeted that police arrived at the hotel where they were staying on Saturday night and told them they could not leave. On Sunday, they were given permission to leave but were then detained in neighboring Assam state at the request of Tripura police.

HW News Network told the Indian Express newspaper that the reporters were detained for their “individual tweets” and not over news reports issued by the media organization.

Their detention sparked widespread condemnations from journalists and rights groups, who say that media freedoms are under attack in India. The country’s ranking on the World Press Freedom Index has fallen in recent years, ranking 142nd out of 180 nations in 2020.