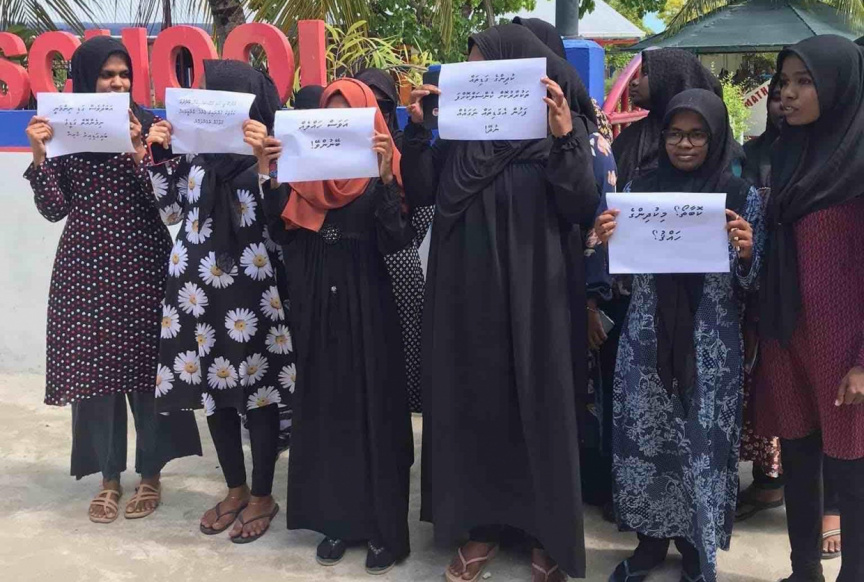 Parents of AA. Mathiveri School students protest over a teacher taking frequent leaves in front of the school on November 15, 2021.

Parents of students enrolled in the foundation stage (LKG, UKG) at AA. Mathiveri School has protested over a teacher taking frequent leaves – stressing that it hinders the education of their children.

The parents also refused to send their children to school today – as the issue has remained unaddressed for over a long period of time.

A parent who took part in the protest which was held this morning in front of the school had told Sun that the school has had only two teachers since last year. The parent said that the problem had arisen when one of teachers had started taking frequent leaves.

Whilst there are two classes in the foundation stage, there are 20 to 23 students in each class.

“There are about 20 to 23 students, amongst which special needs students are there too. How can one teacher teach and control the class?” the parent had said.

The parent further detailed that the issue was raised with a leading teacher at the school – however to no avail.

“They cut the time short because one teacher cannot do it. Three hour classes have been cut down to one hour. Classes have been ending 30 minutes early for a week now too,” the parent added.

Whereas cutting down class hours has been noted by the parent as an issue – another issue the parent had highlighted was that none of the canceled classes had been rescheduled up to date.

“There had been about two days where students were unable to enter the class because the teacher had not come on time. Basically, teachers are irresponsible too,” the parent had said.

The parents had also put in the request to the Education Ministry through the school for the facilitation of an additional teacher as the school’s foundation stages had only two teachers, whilst there were special needs students enrolled as well.

Speaking to Sun regarding the matter, Mathiveri School Principal Hassan Hameed said the Education Ministry had not granted permission to appoint three teachers as the school did not meet the requirements.

“The normal procedure is the appointment of one teacher for every 25 students. We have 43 students. However, we have received complaints from the parents that there are three teachers at schools with even fewer students,” he had said.

Hameed further detailed that discussions were held with the parents this morning in order to solve the issue.

Noting the protest had been triggered by the poor attendance of one of the teachers, Hameed gave assurance that action will be taken to solve the issue with the next two weeks.

Parents have decided that they will only be sending their children back to school once the two teachers are both present. The parent who spoke to Sun also said that that they will be directly requesting the Education Ministry for the appointment of a third teacher.