President: We must chart our collective path towards a sustainable future for all 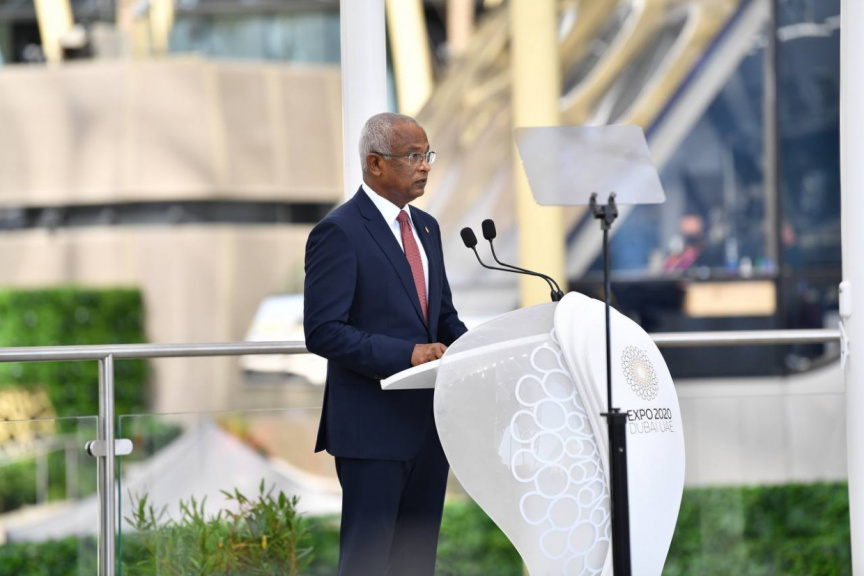 President Ibrahim Mohamed Solih has stated that countries must chart their collective path towards a sustainable, safe and equitable future for all.

He made the statement while speaking at 'Delivering Climate Action – for People, Planet & Prosperity' a high-level meeting convened by the President of the 76th session of the United Nations General Assembly (UNGA), Abdulla Shahid.

In his statement, President Solih highlighted the harmful repercussions of climate change, from unpredictable monsoon patterns to roaring wildfires and devastating floods, stating that the danger has now escalated into a global climate emergency affecting all nations.

Emphasizing that all the devastation comes from only 1.1 degrees of warming, President Solih said that the fate of small islands states now could be the fate of the entire world tomorrow.

He called on all countries for radical changes to their Nationally Determined Contributions (NDCs) to prevent exceeding the 1.5 degrees of warming outlined as the best scenario for a habitable planet.

He said that the world must collectively ensure that every country has the support necessary to adapt to the impacts of climate change.

President Solih also spoke of measures taken by Maldives to achieve net zero by 2030 – but stressed that it is dependent on substantial support and technological assistance from larger nations.

"But we are under no illusion that net zero from small countries will be enough. What is required is big economies working aggressively to reduce greenhouse gas emissions,” he said.

'Delivering Climate Action – for People, Planet & Prosperity' is focused on the gap between current and required technical and financial capacities to achieve the 1.5 degrees target and how that gap can be met. The hybrid meeting – held ahead of the 26th United Nations Climate Change Conference (COP26), which will begin in November in Glasgow, Scotland - aimed to achieve this through showcasing best practices that simultaneously address climate action and the myriad structural challenges exacerbated by the COVID-19 pandemic.