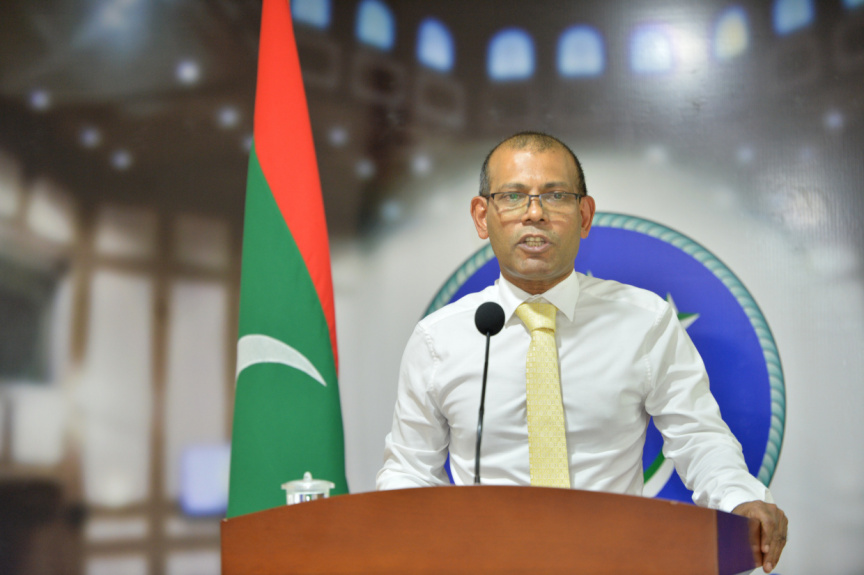 Parliament Speaker, former President Mohamed Nasheed has denied media reports he is back in Maldives for just a three-day visit.

Nasheed, who held his first press conference since the attempt on his life in May on Wednesday afternoon, was asked by a reporter whether he was back for just three days.

Nasheed responded that it was the media decided he was in Maldives for three days.

“It was reporters who decided I came back for three days. It wasn’t something I said anywhere. I have to say this is my third day here. And I am not scheduled to leave today,” he said.

While he denied was back for just three days, he declined to specify how long he was in Maldives for.

Nasheed, who returned to Maldives after four months on Monday, is currently staying at Hotel Jen in Male’.

Nasheed said he was staying in Hotel Jen until the renovation of his official residence is complete, and that his hotel expenses are being covered by the government.

Nasheed said that though he was forced to stay in Hotel Jen, what he really wanted was to stay in his own home.

“I have a home. It’s my deepest wish that I be allowed to stay there. But the MNDF aren’t ready to allow that at this time. They believe it safer for me to stay somewhere alone,” he said.

Nasheed said that though he himself was satisfied with the security he was currently being provided, his daughters remained wary.

The assassination attempt on Nasheed had taken place outside his residence in Male’.

A homemade remote-controlled IED was strapped to motorcycle parked nearby Nasheed’s residence, and was detonated at 08:27 pm on May 6, just as Nasheed exited his residence and went to get in his car. Nasheed was thrown to the ground and sustained multiple shrapnel wounds, while three members of his security detail and two bystanders sustained minor wounds.

He was airlifted to a military hospital in Germany on May 13, and travelled to the United Kingdom in July.

'THOSE WHO FUNDED THE ATTACK WILL BE FOUND'

Nasheed said that the police, when they updated him last, had informed him that they were working on it.

Nasheed has previously expressed frustration at the speed of the investigation, and has accused police of not engaging in enough effort to find the people who financed the attack.

Police have arrested 10 suspects in connection to the assassination attempt on Nasheed. Charges have been filed against 5 suspects.

One of the suspects – Adhuham Ahmed Rasheed, 26, - who the police believe to be the person who detonated the IED – pled guilty to terror charges under a plea deal with the prosecution in September.

Police have stated that they found no evidence to suggest the attack had been financially motivated, and that the suspects involved in the attack believe Nasheed to be an apostate who openly mocks the religion of Islam and Prophet Mohamed, and that killing him to be justified.

Police also said that while they found evidence suggesting the suspects to be ISIS sympathizers, but found no evidence directly linking them to the international terror organization.

Cases of those in indefinite detention to be monitored