Speaker Nasheed back in Parliament after four months, thanks MPs for their work 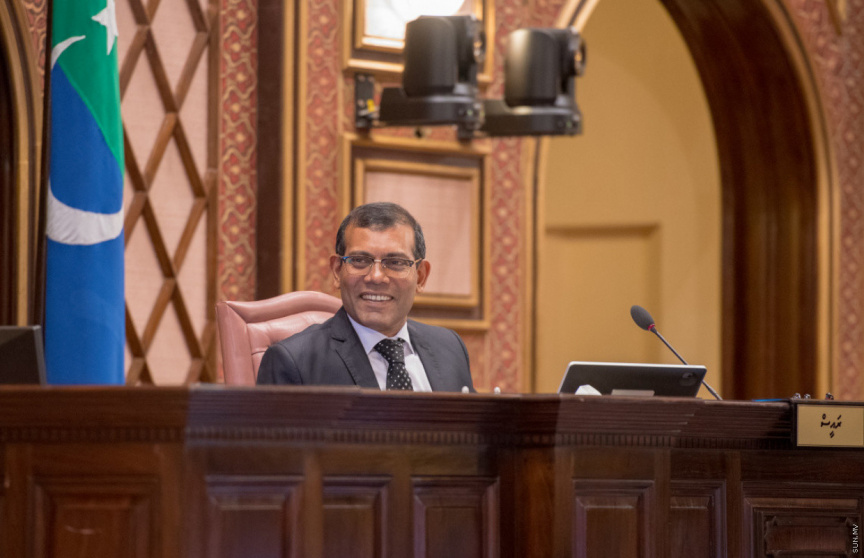 Parliament Speaker, former President Mohamed Nasheed returned to take charge of the Parliament on Tuesday, after a four-month hiatus as he recovered from injuries he sustained in an IED attack.

Opening Tuesday’s sitting, Nasheed noted the speed of work at committees, and thanked parliamentarians for their hard work.

Nasheed also thanked Deputy Speaker Eva Abdulla – who filled in for him in his absence – and Parliament’s Secretary-General Fathimath Niusha.

“And I sincerely thank the Parliament’s Deputy Speaker and Secretary-General. As you know, it has been over 150 days since I presided over this Parliament,” he said.

Nasheed noted that the biggest task ahead for the Parliament is the work on the annual state budget.

He said that some of the state’s revenue sources had generated more revenue than had been projected.

“Revenue from some, such as income tax, was higher than projections,” he said.

A homemade remote-controlled IED which was strapped to motorcycle parked nearby Nasheed’s residence in Male’ City, and was detonated at 08:27 pm on May 6, just as Nasheed, 54, exited his residence and went to get in his car. Nasheed was thrown to the ground and sustained multiple shrapnel wounds, while three members of his security detail and two bystanders sustained minor wounds.

He was airlifted to a military hospital in Germany on May 13, and travelled to the United Kingdom on July 21.

He returned to Maldives on Monday.

Police have arrested 10 suspects in connection to the assassination attempt on Nasheed. Charges have been filed against 5 suspects.

One of the suspects – Adhuham Ahmed Rasheed, 26, - who the police believe to be the person who detonated the IED – pled guilty to terror charges under a plea deal with the prosecution in September.

Police said in a press conference in July that the suspects involved in the attack believe Nasheed to be an apostate who openly mocks the religion of Islam and Prophet Mohamed, and that killing him to be justified.

Police said that while they found evidence suggesting the suspects to be ISIS sympathizers, but found no evidence directly linking them with the international terror organization.

'Parties must work together to revise constitution'