President returns to Maldives after concluding trip to United States 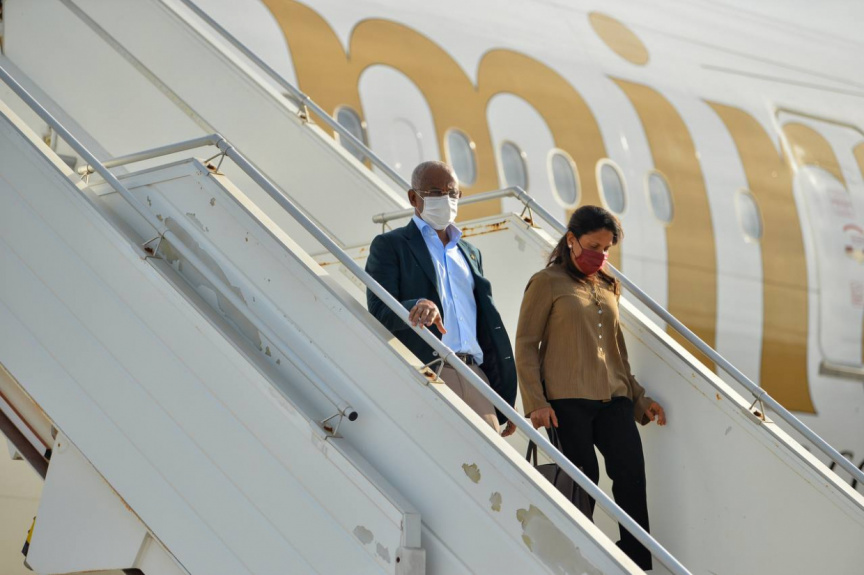 President Ibrahim Mohamed Solih has returned to the Maldives after concluding an official trip to the United States to take part in the 76th Session of the United Nations General Assembly (UNGA) in New York City.

President Solih arrived back home earlier this morning. He was accompanied by First Lady Fazna Ahmed and a high-level delegation during this trip.

In a historic moment for the Maldives, on last Tuesday, President Solih delivered his General Debate Statement at the UNGA in Dhivehi – a notion that validated Maldives' progress in expanding global recognition according to him, as he recalled how the UN had initially debated the merits of admitting small island states such as the Maldives. Moreover, he was allotted the third speaking slot on the first day of the high-level General Debate – a privilege rarely bestowed upon smaller states.

During his address – President Solih spoke on an array of global issues. One of the main topics in his address was climate change – where he stressed that Maldives as a country that is extremely vulnerable to the effects of climate change, will not sit back and wait. Referring to the recently published report by the Intergovernmental Panel on Climate Change on climate change, President Solih noted how the climate emergency would be catastrophic to humanity, and warned that bigger nations would soon catch up with the state of "environmental ruin" that small countries are already experiencing if no progressive action is taken.

“There is no guarantee of survival for any one nation in a world where the Maldives ceases to exist,” he added.

In addition to this, President Solih also spoke regarding the COVID-19 pandemic – urging concentrated efforts to ensure such a disaster does not occur again. He also used the platform to advocate for Palestine to be recognized as the sovereign state and underscored the growing threat of terrorism to the world.

President Solih also participated in a number of events on the sidelines of UNGA. In this regard, he participated in the Climate Moment, a meeting convened by the United Nations Secretary-General (UNSG) Antonio Guterres, and the Prime Minister of the United Kingdom Boris Johnson.

Other high-level events attended by the President during this visit include the panel on Transformative Action for Nature and People, which met to commemorate the 20th anniversary of the adoption of the Durban Declaration and Programme of Action, and the online session of the Alliance of Small Island States (AOSIS) Leaders' Summit 2021

He also held official meetings with a number of world leaders to further enhance the bilateral ties maintained with their respective countries and the Maldives. He also met with UNSG Guterres and President of the General Assembly, Maldivian Foreign Minister Abdulla Shahid.

URA: Bill ‘appeared' high due to halt in discount