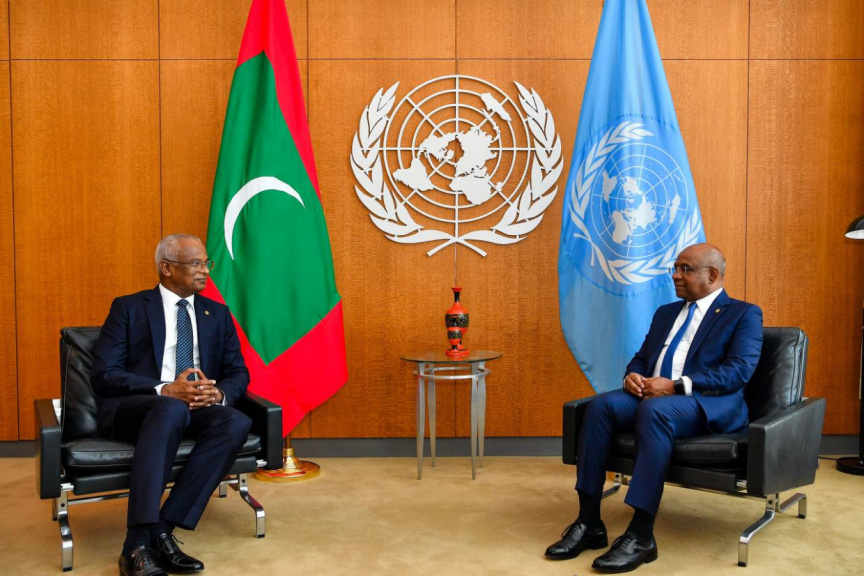 President Ibrahim Mohamed Solih has extended an invitation to Foreign Minister, Abdulla Shahid, to visit the Maldives in his capacity as the President of the 76th Session of the United Nations General Assembly (PGA).

The invitation was extended during a meeting held between the two at the UN Headquarters in New York City on Sunday – in the sideline of the ongoing 76th UNGA sessions.

During the meeting, President Solih congratulated Shahid on his election and wished him success in achieving the Five Rays of Hope that defines the PGA’s term. Following this, Shahid thanked the President for the confidence placed in him throughout the campaign and ensuring election.

Shahid stressed that fully vaccinating the global population against COVID-19 by the end of next year – and ramping climate action will be prioritized from the Five Rays of Hope. He also noted gender equality will also be a high priority during his term – commending the positive steps taken by the President in the Maldives to promote gender equality, citing that 50 percent of the Maldivian ambassadors are women.

Following this, President Solih had thanked Shahid for the success attained so far in foreign policy implantation – in his capacity as the Maldivian Foreign Minister. In response – Shahid noted that the success of Maldives’ foreign policy is due to the talent and professionalism of the foreign service of the Maldives.

Speaking further, both President Solih and Shahid had agreed on the necessity to ramp up the political will to maximize resource mobilization in regard to equitable access to affordable vaccines and socioeconomic recovery in the face of the pandemic.