President: No guarantee of survival for any other nation in a world where Maldives ceases to exist 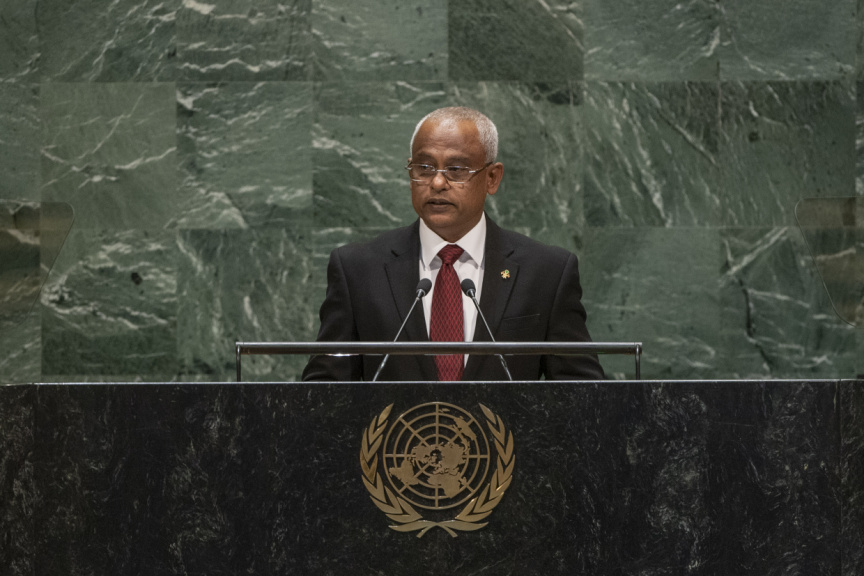 President Ibrahim Mohamed Solih had stated that there is no guarantee of survival for any other one nation in a world where the Maldives ceases to exist.

He had made this statement whilst talking about climate in his debate statement at the 76th Session of the United Nations General Assembly. In this regard, he stressed that the environmental problems small island states are enduring now will no doubt, soon catch up with bigger nations.

“There is no guarantee of survival for any one nation in a world where the Maldives ceases to exist. I come here today with messages that resonate closer to the heart, than the cold facts presented by science, I carry in my hand, the words of young Maldivian children who have written to me asking me to share their pleas for our world’s climate, with this assembly,” he had said whilst showing the said letters.

President Solih then explained that the children’s pleas are to protect the vulnerable environment of the island nation they call home – adding that it is the collective calling of generations to come.

“We must listen. We remain hopeful that the day is not lost to reach safety," he added.

Speaking further, President Solih urged countries to adopt more stringent measures to reduce atmospheric emissions and adopt cleaner, smarter technologies for their energy use – adding that this can only be achieved when wealthier and bigger nations support smaller nations in forms of capacity building, technology transfers and financial resources for them to combat climate change.

“We have put forward an ambitious plan to reach net-zero by 2030, which we hope to achieve with international support,” he added, referring to the Maldivian government’s target to reach net-zero carbon emissions by the year 2030.

In addition to climate change – President Solih had discussed an array of global issues such as the COVID-19 pandemic and terrorism during his general debate statement at the 76th Session of UNGA. He had delivered his remarks on the third speaking slot this year; early slots are rarely accorded to smaller states. Moreover, he had delivered his address in Dhivehi language.

The recently inaugurated 76th Session of UNGA is presided by the President Abdulla Shahid – the Maldivian Foreign Minister.