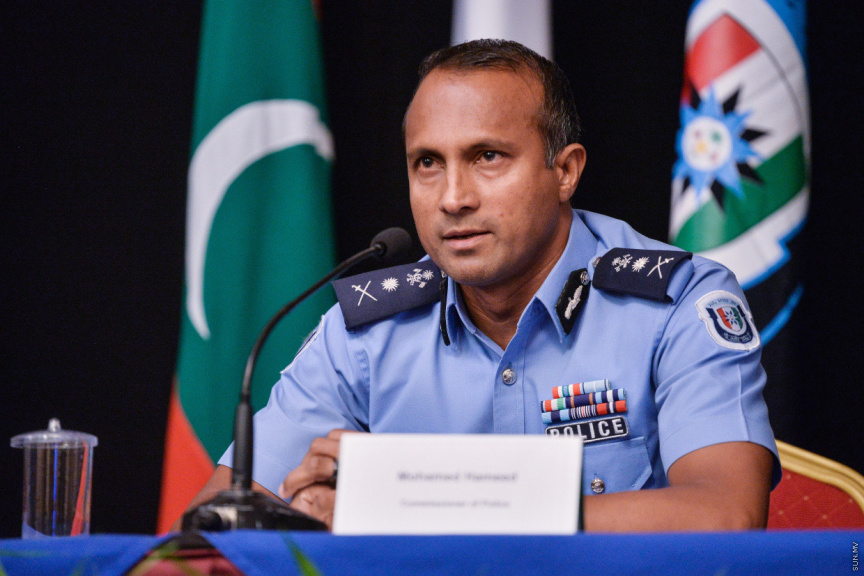 Commissioner of Police Mohamed Hameed said on Wednesday that the police will not distinguish between suspects or a group they may be affiliated with in discharging their duties when it comes to drug cases.

He made the remark in response to questions by the Parliament’s Petitions Committee, which is reviewing the ‘Change NDA' Petition.

“We note that these 20 cases alone involve the trafficking of 413 kilos of drugs. This will be put a measure of stop to once the suspects are prosecuted, once they are delivered the punishment they are due under the law, and the punishment is executed,” he said.

Hameed said that though the courts convict drug traffickers, the convictions are not enforced.

‘DRUG CRISIS REMAINS UNRESOLVED DUE TO LACK OF EFFORT’

Inguraidhoo MP Hassan Ahmed (Hassantay) said that Maldives has been facing the issue of drug trafficking since 1974, and that the drug crisis remains unresolved due to lack of effort to solve the issue.

"They are getting the budget. They are getting employees. Institutions are being created. There are laws,” he said, as he asked who should be responsible for the worsening of the situation as the years go by.

Hassantay said that the government had spent millions on machines and other resources as soon as Maldives identified its first COVID-19 cases, and had managed to control the spread of the disease through collaborative effort.

He said that while all state institutions claim that drugs are a far worse pandemic than COVID-19, the issue is not receiving as such effort and attention as the COVID-19 pandemic.

“Who should be reponsible as nothing is done to solve this to this day and the country falls into crisis? You are saying there isnt even a machine in the international airport in Maldives to detect this [drugs]. But machineries  were brought in after paying 15 million, 20 million, 25 million during Covid. But there arent even machines for that,” he said.

Hassantay said that prisons in Maldives are filling up with drug offenders who arent getting the rehabiltation they need, adding to the state’s burden.

He said that the issue cannot be resolved by simply releasing reports and talking about it.

“It cannot be solved. Because nothing is being done. I say this very clearly. If effort was being made to solve this, this would have already been resolved,” he said.

‘POLICE DOING EVERYTHING IN OUR POWER’

CP Hameed said that all state institutions have a part to play in solving the issue, and that the police are doing everything in their power to solve the issue.

“We are fulfilling our responsibilities as an enforcement agency. As I said before, I will not look at anyone’s face, a particular network, a particular group, or particular electoral district,” he said.

Hameed said the issue cant be solved by defending people who traffick and distribute drugs.

'Operation by security forces is to counter gangs'