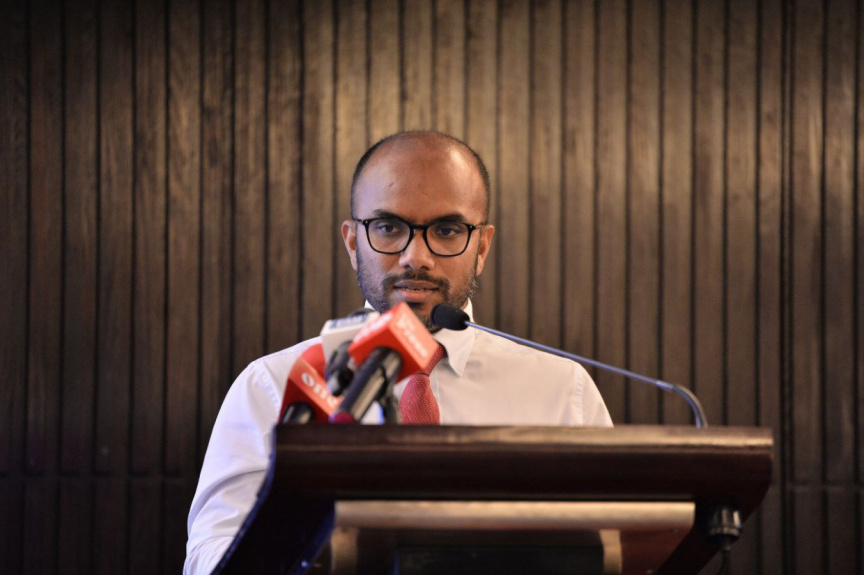 Finance Minister Ibrahim Ameer said on Thursday he expects Maldivian economic growth to double and GDP to increase to USD 10 billion in the coming years.

He made the statement in his speech at the signing of the agreement for the Greater Male’ Connectivity Project with India’s Afcons Infrastructure Limited on Thursday morning.

Ameer said that Maldives’ real GDP had stood at approximately USD 5 billion in 2019 – when the country recorded 1.7 million tourist arrivals.

Ameer said he is confident the real GDP will double in the coming years.

“Once the capacity is increased at the Velana International Airport, the port development project complete, the domestic travel network upgraded, and the current tourism development projects complete, we expect the economy to grow to USD 10 billion in the coming years,” he said.

Sudhir said that the Greater Male’ Connectivity Project is proof India is an important development partner to Maldives.

“The Greater Malé Connectivity Project is concrete proof that India is a robust development partner of the Maldives in addition to being the first responder in times of any emergency in the Maldives,” he said.

Sudhir said the Thilamale’ bridge will result in economic progress, and that India is confident the Maldivian economy will grow to USD 10 billion soon as the Finance Minister said.

The Greater Male’ Connectivity Project - the biggest infrastructure project in Maldives – will link Male’ City with Thilafushi, Vilimale’ and Gulhifalhu.

The project is financed with a USD 400 million line of credit from India’s EXIM Bank, and a USD 100 million grant from India.

India’s EXIM Bank issued the loan at a 1.75 percent interest rate. The loan must be repaid within 15 years after a grace period of 5 years.

The project agreement was signed in a ceremony at Hotel Jen in Male’ by Planning Ministry’s Permanent Secretary Zeeniya Ahmed Hameed and Afcons’s Director.

Greater Male’ Connectivity – Male’ to Thilafushi Link Project is a 6.7-kilometer sea crossing link from the south-west corner of Male’, running adjacent to the south shore of Vilimale’,then along the southern periphery of reclaimed land on Gulhifalhu, and terminating on land at Thilafushi.

'War problematic, but will not derail economy'

Finance Minister: Maldives not at risk of default

'Differences between two leaders will be resolved'