112,000 doses of AstraZeneca vaccine donated by Japan arrives in Maldives 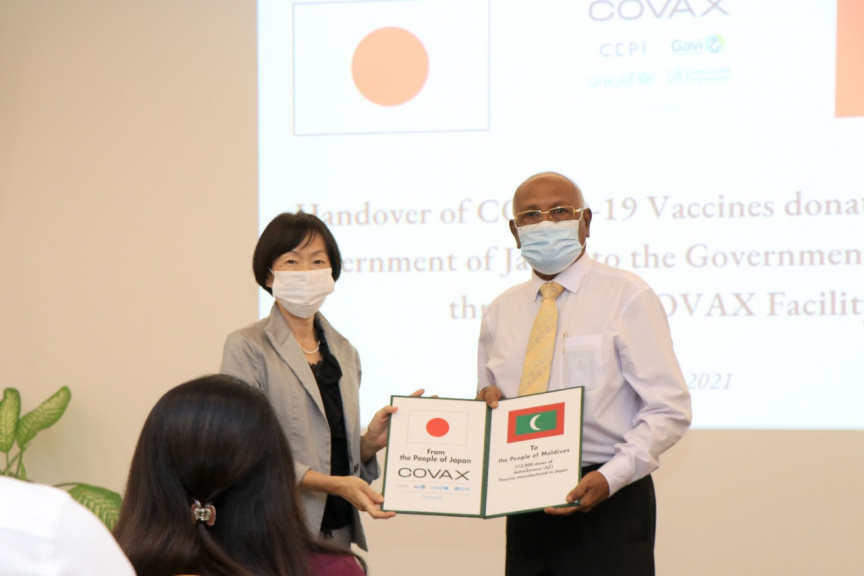 Handover ceremony of 112,000 doses of AstraZeneca vaccine donated by Japan to the Maldives on August 22, 2021. (Photo/Foreign Ministry)

The vaccine shipment was transported to the Maldives by a Sri Lankan Airline flight which landed at Velana International Airport this morning. The vaccine shipment donated by Japan is via the COVAX facility and contains 112,000 doses of the AstraZeneca vaccine that is a part of the 11 million doses that Japan is donating to the COVAX Facility.

Japan is donating COVID-19 vaccine through the COVAX Facility to a total of 11 countries – including the Maldives. 11 million doses which are being donated in this regard, will be distributed amongst the 10 countries.

Speaking at the ceremony, Ambassador Yanai noted that the vaccine was being donated to aid in the recovery efforts by the countries. She also thanked Maldives for the good diplomatic ties maintained between Japan and Maldives.

“I assure that Japan always will maintain good relations with Maldives,” she had said.

Also speaking at the ceremony, Minister Naseem thanked Japan for the generous donation.

'Will support those who favor a parliamentary system'