Demonstration held calling to lower the rent of Hiya Flats 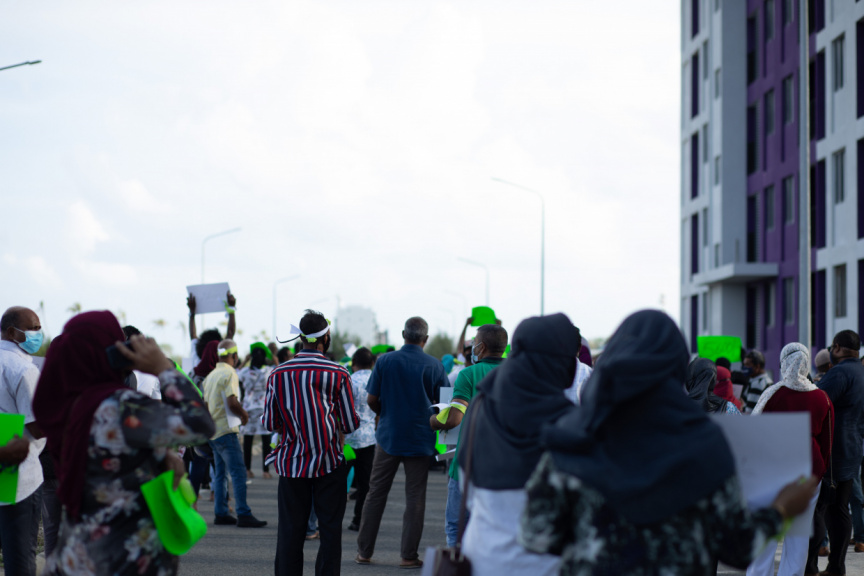 Demonstration held at Hulhumale' Phase 2 by Hiya Flat owners demanding to lower the rent of the units on August 13, 2021. (Sun Photo/Ibrahim Ifaaz)

Hiya Flat owners held a demonstration today calling to lower the rents of the housing units.

The demonstration which was held at Hulhumale’ Phase 2 this evening saw the participation of about 100 flat owners – where they shared their concerns regarding the Hiya Flat through written boards and banners.

One of the main concerns raised in this regard is the high rent of the units – being MVR 7,500 per month in addition to MVR 1,000 per month for maintenance services. The flat owners were calling to reduce the rent to MVR 5,600.

Other concerns raised were mostly related to the finishing works of the unit – which remains incomplete as the units are currently being handed over to the owners. In this regard, the flats have not been supplied with electricity as well.

Prior to the demonstration, Hiya Union has told Sun that it was being held at the government had turned a deaf ear to their concerns. Hiya Union is an organization that advocates on behalf of Hiya Flat receivers.

In this regard, they noted they had submitted a petition to the government stating their recommendations to solve the issues raised – for which they have not been given a reply.

As per Hiya Union, they have highlighted three main requests in this petition. They are:

The signing of the agreements of the Hiya Flats commenced on July 13. The rent will be enforced starting from December.