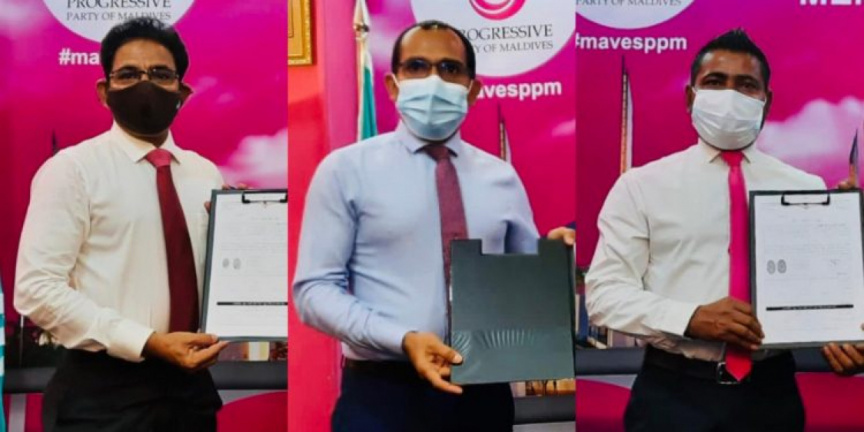 The three politicians signed with PPM in a function held at the party headquarters on Monday night.

Of the three politicians who joined PPM this Monday, Lawyer Wadde has worked with PPM to bring former President Abdulla Yameen Abdul Gayoom back in 2013.

He had also been elected to the Parliament as a PPM candidate.

However, he left PPM with former President Maumoom Abdul Gayoom following the power struggle between Maumoon and Yameen for control of the party, and later campaigned to bring President Ibrahim Mohamed Solih to power in 2018.

He last worked as a member of Jumhoory Party (JP) – a government coalition partner.

Maleeh, meanwhile, was one of the original members of President’s Cabinet. However, he was dismissed from his post as Technology Minister in a no-confidence vote by the Parliament in March. Parliamentarians from the PPM-PNC coalition had also voted to dismiss him.

Barely a week after his dismissal, Maleeh announced that he intended to work against ruling Maldivian Democratic Party (MDP), but had yet to decided if he would join the opposition coalition. He left JP on March 10.

Rukuma, meanwhile, had previously been a member of MDP, and had campaigned to bring President Solih to power in 2018.

He was later seen campaigning for Dr. Muizzu during the local council elections this year.