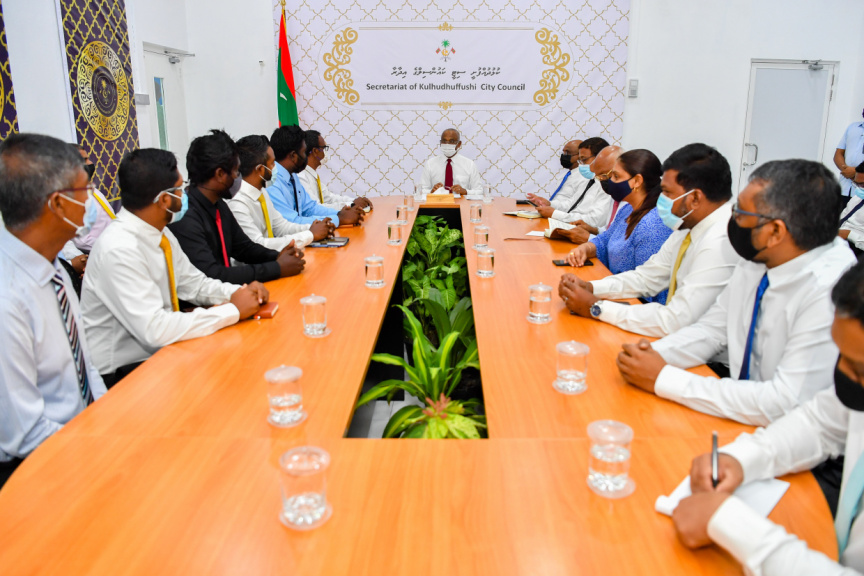 President Ibrahim Mohamed Solih has met with members of the HDh. Atoll Council to discuss developmental needs of the region as part of the first couple’s ongoing tour of several islands in the region.

The meeting took place at the HDh. Atoll Council headquarters in Kulhudhuffushi City on Friday night.

According to the President’s Office, the President and council members deliberated on several issues and concerns with regard to the development of the atoll.

Some of the issues raised by councilors include the urgent need to initiate the Hanimaadhoo Airport development project, the establishment of a proper functioning inter-island transport network, upgrades needed for island harbors, water and sanitation networks, schools, and social developmental needs of the youth.

President Solih, meanwhile, highlighted on developmental efforts undertaken by the government and provided the latest updates of ongoing projects in the atoll.

He also underscored the significance of a modern international airport in the region and detailed the status of the Hanimaadhoo Airport development project.

After his meeting with the councilors, President Solih met with some local business operators from Kulhudhuffushi City and heard their concerns.

The first couple’s current visit to Kulhudhuffudhi City is the first leg of a three-island trip to the north of Maldives. From Kulhudhuffushi City, the President and First Lady will visit HDh. Kumundhoo and then HDh. Hanimaadhoo.

They are accompanied on the tour by Cabinet ministers and other senior government officials.