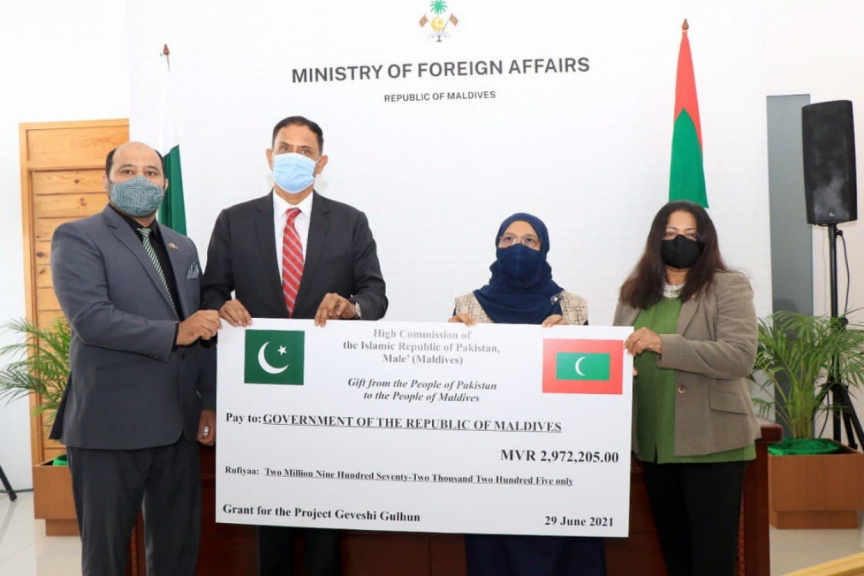 The cheque for the MVR 2,972,205 grant was presented by Pakistani High Commissioner Vice Admiral (Retired) Ather Mukhtar to Maldivian Gender Minister Aishath Mohamed Didi in a ceremony at the Foreign Ministry in Male’ on Tuesday.

Pakistan and Maldives have also signed a joint monitoring mechanism agreement for the effective implementation of the project.

At Tuesday’s ceremony, Minister Aishath said that the ongoing COVID-19 pandemic has seen a surge reports of domestic violence.

She said that the ‘Geveshi Gulhun’ project will be helpful in creating awareness regarding the issue, and in reducing incidences of domestic and gender-based violence in Maldives.

She thanked High Commissioner Mukhtar, the Pakistani government, and the people of Pakistan for the generous assistance to sponsor the project, and said it symbolizes the close relations between Maldives and Pakistan.

High Commissioner Mukhtar, in his speech, stressed on the importance of the ‘Geveshi Gulhun’ project in creating awareness and strengthening social protection service in Maldives.

He also commended Maldives for its significant progress in advancing the status of women in the country, and said he is happy to see the lack of overt gender discrimination in education and other areas.

Mukhtar also spoke of the long cordial relations between Maldives and Pakistan, which he said is based on common faith, culture, common principles and mutual trust and respect.

He noted that when Maldives celebrates its Independence Day on July 26 this year, Maldives and Pakistan will also be celebrating 55 years to the establishment of official diplomatic relations between the two countries.