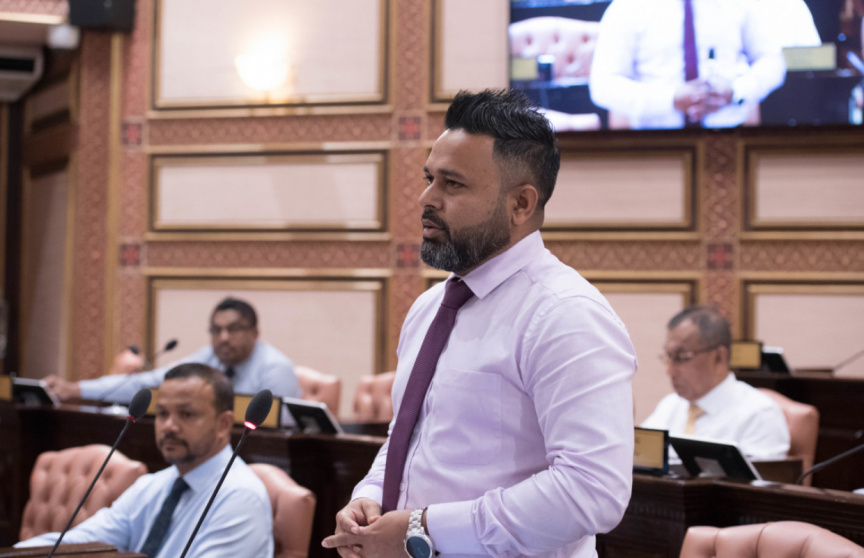 Naifaru MP Ahmed Shiyam presented an emergency motion at the Parliament on Monday, calling for a ban on Israeli tourists until Israel ceases its vicious offensive against the Palestinian people.

Presenting his motion, Shiyam noted that the Israeli occupied forces attacked Palestinians who protested against the decision to evict scores of Palestinian families to build illegal Israeli settlements Sheikh Jarrah, a neighborhood in East Jerusalem during last Ramadan. And attacked Masjid Al-Aqsa in response, forcing their way in, and spilling the blood of worshippers and violating the sanctity of the holy site.

He also noted that the Israeli occupied forces strengthen the serial attacks targeting Gaza each Ramadan, and that scores of children, woman and elderly have been martyred, washing the ground in Gaza with their pure blood with the adoption of the Dahiya Doctrine, which permits the indiscriminate killing of militants and civilians alike.

Shiyam said that Israel’s actions have reached pinnacle of inhumanity.

He said that Maldives, and the international community at large, must stand against the illegal settlements being built in occupied lands in open disregard for international laws, the planned attacks to destroy Masjid Al-Aqsa.

Shiyam said that 174 Palestinians, including 47 children and 29 women had been martyred in Israel’s attacks in Gaza, and 11 people gunned down and hundreds gravely injured in peaceful protests in East Jerusalem by the time he prepared his emergency motion.

Shiyam said that Maldives has an obligation to speak out against Israel’s aggression as a 100 percent Islamic nation. He said that a mere statement of condemnation is not enough, and that Maldives must take action.

He therefore called on the Maldivian government to impose a ban on Israeli tourists and ban the import of Israeli products as decided back in 2014 during former President Abdulla Yameen Abdul Gayoom’s administration until Israel ceases its offensive.

The emergency motions comes with scores of Maldivians calling for a ban on Israeli tourists and products in social media platforms.