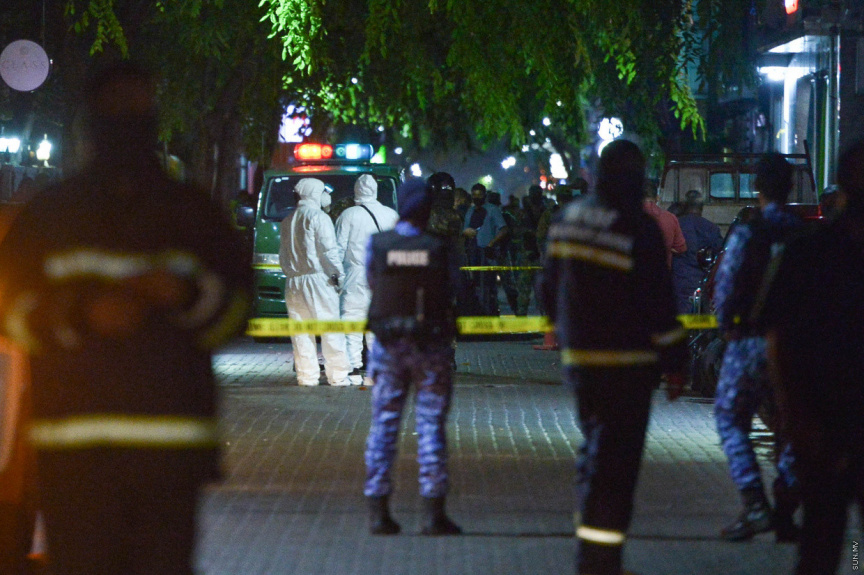 Police at the scene of the attack. (Sun Photo/Fayaz Moosa)

The Maldives Police Service has stated that last night's attack on the former President of the Maldives Mohamed Nasheed was a terrorist attack.

The blast happened near the junction of Neeloafaru Magu and Majeedhee Magu last night. A tourist was also injured in the attack as well as Nasheed’s bodyguards. Nasheed was getting into his car near his residence in G. Canaryge when the blast happened.

In a press statement issued today, police said that the incident is being investigated with the utmost priority and that all the investigative and forensic resources of the police are being used for the investigation into the attack.

The police statement also called on bystanders and any witnesses who were in the area who saw anything suspicious or anyone with information related to the attack to provide information by contacting 9704000. The information shared and the identity of the individual would be kept confidential, stated the police.

Police also said that special efforts were being made to patrol and maintain the security of the capital along with the Maldives National Defense Force (MNDF).

Nasheed is still in the hospital receiving treatment for the wounds sustained from the attack. The hospital has stated that Nasheed requires one more surgery after multiple successful procedures were carried out on him.

Forces storm prisons in op. linked with May 6 blast

Maldives to conduct intelligence audit over May 6 blast