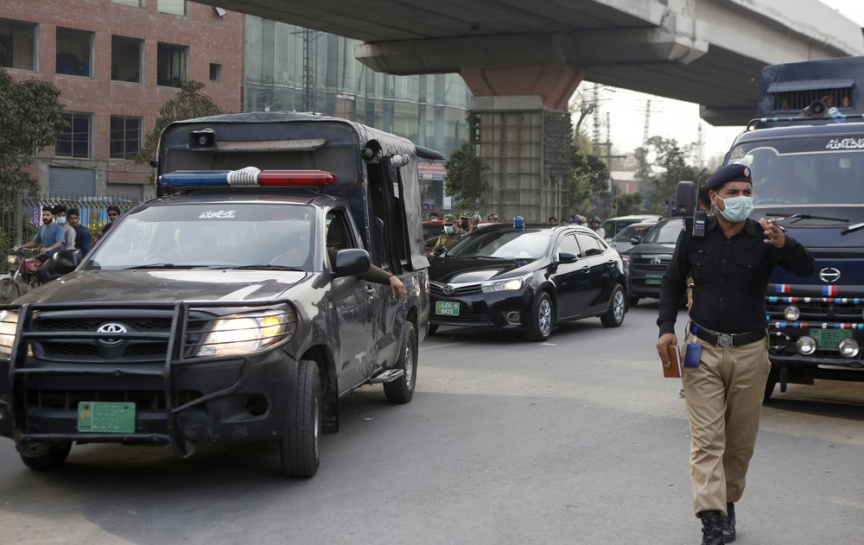 A police officer clears way for a convoy of an anti-terrorism court judge Arshad Hussain Butta arriving at district jail, where the special court setup for the trial of prime suspects in motorway gang-rape case, in Lahore, Pakistan, Saturday, March 20, 2021. (AP Photo/K.M. Chaudary)

LAHORE, Pakistan (AP) — A Pakistani court sentenced two men to death on Saturday for the gang rape of a woman in front of her children last year alongside a motorway in the eastern city of Lahore, a prosecutor said.

Hafiz Asghar said the verdict in the closely watched, six-month trial of Abid Malhi and his accomplice Shafqat Ali was issued inside the prison where it was held in Lahore. Judge Arshad Hussain Bhutta also sentenced the men to 14 years imprisonment, time that must be served before any executions can take place, he added. Appeals or commutations are likely.

According to the prosecutor and police, Malhi and Ali found the woman waiting for help after her car ran out of fuel. She had locked the car doors but the attackers broke a window and dragged her outside where they raped her at gunpoint in front of her terrified children. The men also stole money, jewelry, and bank cards before fleeing.

They were tracked down via mobile phone data, Asghar added, and arrested days after the incident. DNA samples taken from the crime scene matched thiers. The survivor identified the two men during the hearing, and Ali confessed to the crime before a magistrate.

The crime had drawn widespread condemnation on social media, with some activists demanding that those involved be hanged in public, and has been closely followed on Pakistani television. Human rights activists have urged the government to introduce harsh new penalties for rapists. The case was handled by an anti-terrorism court for expediency.

Malhi and Ali did not hire lawyers, and their state-appointed attorneys were not available for comment following the verdict.

Gang rape is rare in Pakistan, although sexual harassment and violence against women is not uncommon. Nearly 1,000 women are killed in Pakistan each year in so-called “honor killings” for allegedly violating conservative norms on love and marriage.