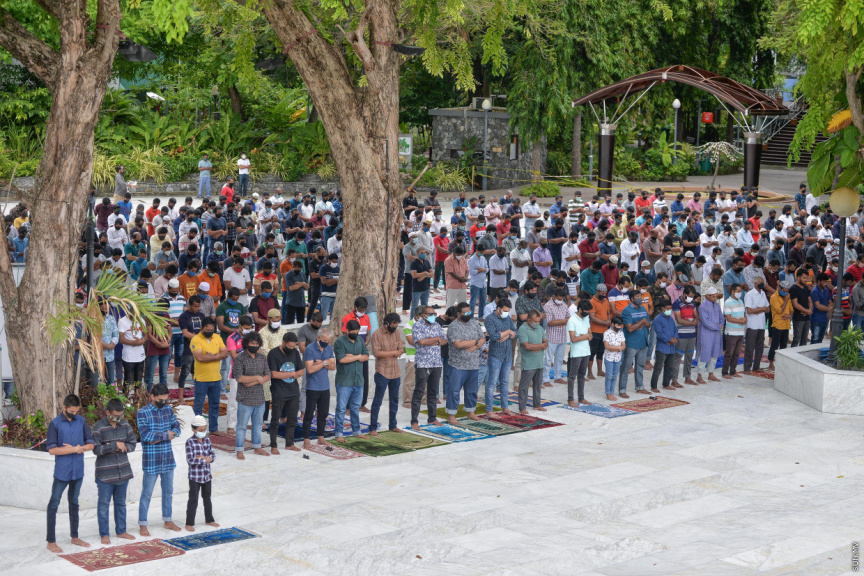 July 10, 2020: Friday prayers were performed in Male' City for the first time after almost three months due to the COVID-19 lockdown. (Sun Photo/Fayaz Moosa)

The Supreme Council for Fatwa in the Maldives has determined that congregational prayers can be performed with social distancing in light of the situation with COVID-19 in the nation and that it was not something forbidden or discouraged in Islam but permitted.

The Fatwa Council clarified the religious standpoint regarding the debate over whether congregational prayers can be performed with social distancing. The Council noted that the pandemic meant that there was difficulty in performing some religious activity as per the norm since it could spread the virus even further.

The Council analyzed the teachings of renowned scholars and the judgment of institutions as well as the Sunnah of the Prophet Muhammad and the Holy Book of Quran in order to fully address this issue and make a determination on the matter.

The Council stated that it was permitted to cease congregational prayers due to the possibility that the virus could spread even further, based on the judgments of Fatwa Committees across the world. The Council said that the principles of Islam were based on convenience for Muslims and reducing hardships and safeguarding the community from danger.

The Council also said that teachings of the Prophet had shown that despite the fact that it was encouraged to perform congregational prayers in close proximity with each other, it would still not negate the prayer if it was performed with distance in instances where the rows of worshippers were incomplete, as per Jumhoor scholars.

The Council also said that it was mandatory to prioritize the health of the community and that in the religion, it was also made mandatory to follow the advice of medical officials.

It was also the practice followed by several nations across the world, stated the Council, before warning that violations of health protocols and regulations placing the entire community in danger would be sinful.

The Islamic Ministry had instructed that congregational prayer in mosques be performed with social distancing on March 1. However, the issue has caused controversy among religious scholars in the Maldives.