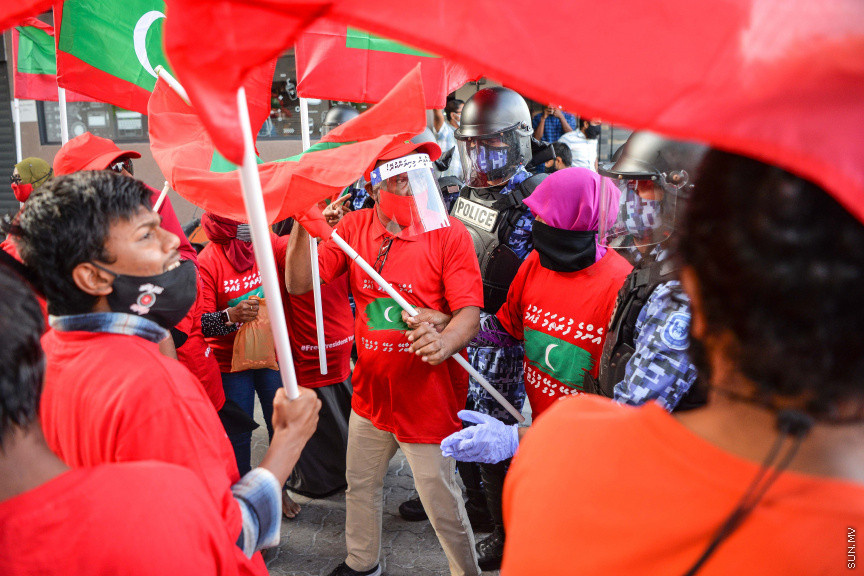 Police and the Home Ministry had earlier warned that it will not permit any unlawful public gatherings during the tense situation with COVID-19 in the Maldives.

Despite this, dispersed groups of protesters were spotted across the capital in the evening. The protests were planned by the opposition Progressive Coalition under the banner "Where is my flat?" and also called for the freedom of jailed ex-president Abdulla Yameen.

Progressive Coalition officials in a press conference afterward, alleged that the government was taking undue advantage of the current health emergency in place across the nation. They also condemned the conduct of the police regarding an incident where a protester was hurt today.

The injured protester suffered head injuries after being collided into by another protester who was fleeing the police after breaking police lines. Video footage of the incident showed protesters running into a cafe near the PPM office as they are being pursued by police who were trying to control the protests.

One of them collided with a man standing near the cafe who suffered the injuries. The man suffered bleeding to the head and was assisted by police officers at the scene. He was later taken to the hospital in a police vehicle. No further details are available of the incident or the injuries to the man.

Police stated that those arrested before the protests commenced were leading figures behind the planning of the protests and that they were arrested to stop the protests from being carried out in the capital.